Leader of The Golden Path

Seize control in Kyrat and Make Kyrat a progressive state by using forced labour (succeeded or failed depending on player choice) .

Amita is one of two main antagonists and leaders of the Golden Path rebel group opposed to the rule of Pagan Min in Far Cry 4.

Amita never knew her parents. Instead, she was raised by her uncle and aunt, both of whom supported the Golden Path under the rule of its beloved leader, Mohan Ghale. However, Mohan was never beloved by Amita. Instead, she hates his legacy. She felt he was fighting to keep Kyrat stuck in its old ways and even if they were victorious, her country would still be oppressed by tradition. Amita intends to abolish Kyrat's traditions and turn it into a more progressive state. This places her at constant odds her against rival, Sabal and his traditionalist values. Sabal accuses Amita of trying to turn Kyrat into an oppressive dictatorship run by drugs, stating that she's not any different than Pagan Min.

For most of the game, both Sabal and Amita are allied with the player and, at least marginally, each other. However, they constantly disagree, and several times in the course of the game, the player is forced to choose between missions supporting Sabal and Amita. In many of her missions, the player is tasked with protecting drug fields and looking for intels about the Royal Army, which leaves the stranded Golden Path members to their deaths. In the final mission, Amita has the player to destroy Jalendu Temple, where Sabal had intention to crown Bhadra as Tarun Matara. Amita then orders the player to assassinate Sabal.

After the death of both Sabal and Pagan Min, Amita can be found at the outpost of Tirtha. There, she reveals her intentions to turn Kyrat into a totalitarian drug state. She proceeds to order her soldiers to go into villages, conscripting children to be recruited as soldiers into the army, claiming that the increased numbers are necessary for enforcing Kyrats future peace and protecting the drug fields. When Ajay demands to know what she has done with Bhadra, Amita claims that she sent her where the Golden Path's enemies cannot rally behind her, implying that she had Bhadra murdered as she tells Ajay "she won't be coming back". At this point, Ajay can either shoot Amita or leave her alone, although shooting her has no further effect to the game. 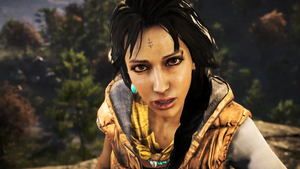 Retrieved from "https://villains.fandom.com/wiki/Amita?oldid=4141939"
Community content is available under CC-BY-SA unless otherwise noted.