Pointing at things and glaring.

Embracing darkness.
Emerging only at night.Embracing fire.
Loving fireworks.
Loves having tributes including sacrifices paid onto him alone.
Indulging in the suffering of others.

To reign over the kingdom of Agrabah with fear and an iron fist (failed).

Amok Mon-Ra (sometimes spelled "Amok Mon Ra" and errronously called "Amok Mongra") is a very powerful and ancient demonic being who is said to be malevolence incarnate and therefore completely unreasonable, and he is the main antagonist of the episode "Hero With A Thousand Feathers" of the Aladdin animated TV series.

He was voiced by Tim Curry.

Amuk Moonrah once ruled over the land Agrabah thousands of years ago, but was somehow imprisoned by the people.

The cycloptic sorcerer Fasir warns Iago about Amok and that he alone can defeat him. Iago never believes in prophecies and brushes Fasir's words aside as mere hocus pocus. Later, Iago explores a cave for a new trade route with Aladdin and his friends. Iago freaks out in the dark, grabs a torch, and lights up the cave, awakening Amok Mon Ra via the demon's once extinguished flame.

Amok easily defeats Genie, but is forced to hide from the sunlight since he can only emerge at night time.

The following night, he appears before the gates of the city of Agrabah. After a very short fight with Genie, Princess Jasmine gives him the city and became his slave. He forces its citizens to build him a throne at the palace. He acts as if he were a god by subjugating the people into worshiping him and paying him tribute.

As the night passes by and morning slowly approaches, a merchant shows Amok Mon Ra the wondrous "magic" of fireworks. Amok Mon Ra became pleased with it and orders both a fireworks spectacle and a lifelike, gold-filled statue of him when he returns.

Aladdin sees this as a way to destroy the heartless monster. He tells the people to make the statue, but instead of filling it with gold it would be filled with fireworks. Jasmine presents Amok his statue and while he examines it, she takes cover. When she is safe, Aladdin himself lights the fuse and the statue blows up right in the creature's face.

At first, it seems everyone celebrates his defeat. However, Amok Mon Ra then reappears bigger than before, proudly declaring that he was born from fire and that it only increases his power.

At this point, Iago (who had spent his time relaxing on an island far away and had been scared back by a frightful image of his conscience in chains) flies in and shows him the amulet the sorcerer Nasir had given him. Amok Mon Ra reels back at the sight of it, but nothing happens. Iago is unsure what he was supposed to do at that point until he realizes the amulet would not work unless Amok ingests it. Aware of this, he flies headlong into the open mouth of the monster. At the same time, Genie makes a final attempt to take Amok Mon Ra down and "succeeds", making it look like he did the work. Iago, pretending to be ungrateful about it, chastises Genie and flies away.

Aladdin wonders what Iago's deal is and hopes they never have to rely on the parrot to save the day. What no one realizes, or will ever realize, is that is exactly what happened, and despite Iago not getting the credit, he is happy with the fact that he did something heroic for a change. 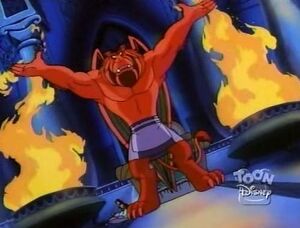 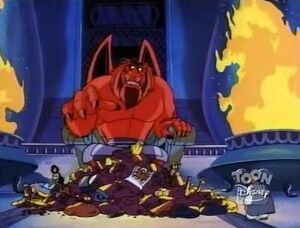 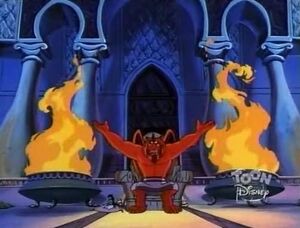 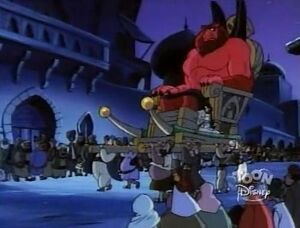 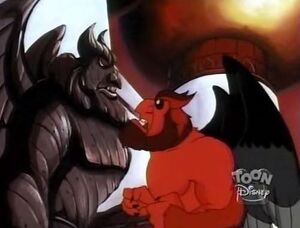 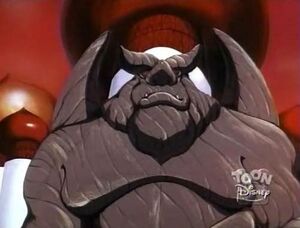 Retrieved from "https://villains.fandom.com/wiki/Amok_Mon_Ra?oldid=3750352"
Community content is available under CC-BY-SA unless otherwise noted.