Break Cindy Sauer emotionally, so she would be easy to possess (succeeded).

Amon is the main antagonist of the A Haunting episode The Exorcism of Cindy Sauer. He is a powerful demon that targeted Cindy Sauer and tried to take over her body. After a two hour exorcism, he was expelled from Cindy and sent back to Hell.

After her husband commits suicide, Cindy Sauer and her daughter are affected emotionally by an evil entity. A little while after, Cindy starts dating again and meets a man named Jason, who is interested in the paranormal. One night, the two decide to investigate an abandoned house. During the investigation, a shadow figure knocks Cindy down and scares them away.

The same night, Cindy and Jason are sitting on the tailgate of a truck, when a shadow figure appears and attacks Cindy. Jason manages to help her fight off the attacker, but when they get in the truck to drive away, Cindy is taken over by the entity and growls at Jason.

Amon never shows its true form and only appears as a tall shadow figure. 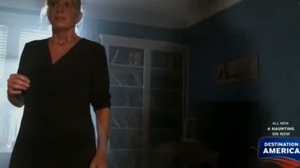 Amon appearing during the exorcism. 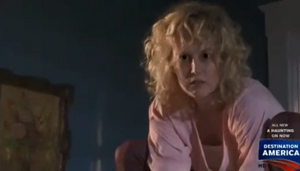 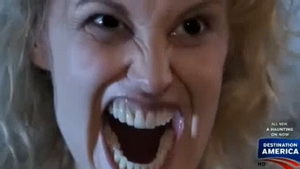 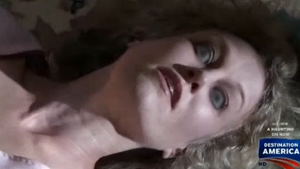 Amon's eyes.
Add a photo to this gallery

Retrieved from "https://villains.fandom.com/wiki/Amon_(A_Haunting)?oldid=3463250"
Community content is available under CC-BY-SA unless otherwise noted.