Villains Wiki
Register
Don't have an account?
Sign In
Advertisement
in: Mature, Demon, Status Dependent on Version,
and 37 more

Killing both humans and demons alike.

Cause chaos and destruction for his amusement.

Take revenge on Satan for fusing him with Akira (both failed).

Amon is an extremely powerful demon and the deuteragonist in the Devilman franchise, first appearing in the Devilman manga of 1974. He is the source of Akira Fudo's demonic abilities, and as a result he is also the catalyst behind the creation of the eponymous super-hero Devilman.

With inhuman strength and fighting prowess he is known as the God of War in Hell. In Amon: The Apocalypse of Devilman, he is the main antagonist of both the OVA and the manga series after Akira loses control of his powers. Sirene was Amon's lover, but due to Akira obtaining Amon's powers, Sirene blamed Akira for his disappearance. During a Black Sabbath ritual led by Ryo, Amon tries to take over the human Akira Fudo, but due to his pure heart Amon's consciousness was suppressed and Devilman was born.

After Akira witnesses the brutal murder of Miki and her family, Akira's anger causes Amon to finally regain control over the boy, causing a large red humanoid with black wings and fur to emerge from Akira's body.

After Amon emerges, he no longer has a human host to control him, leading the demon to become berserk. He then goes on an unrepentant slaughter, killing both friend and enemy alike, even going so far as to devour a demon who was a close friend of his. After Amon finally confronts Satan, he attempts to fight against him, but is stopped when Satan (in a manga Satan first effortlessly subdues Amon without even physical contact and Satan could've killed Amon if Satan wished to) uses his powers to awaken Akira (who was sealed deep within Amon's sub-consciousness).

In a final confrontation, both Amon and Devilman clash within their consciousness, with the former gaining the upper hand. At the verge of death, Devilman remembers the time he spent with Miki while she was alive and uses it as his reason to fight back, ultimately defeating Amon and ending the demon's reign of terror.

In this reboot manga which amalgamets story elements of both the original manga and the first anime series, Amon is now the main protagonist alongside Miki Makimura. He takes possession of Akira Fudo's nearly dead body after a Miki's demon summoning attracts the attention of several highly powerful demons. But instead of completely taking over, Amon's mind melds with that of Akira's, thus rendering Amon into a far more pleasant and calm being, albeit stil prone to violence. It is because of their minds melding that Amon eventually develops loving feelings towards Miki and decides to help her protect humanity from the oncoming apocalypse.

In all of his appearances Amon has been the spitting image of the traditional Christian devil, although with a few key differences such as a lack of horns and cloven feet. Amon is a powerfully built, towering demon with two black wings on the sides of his head, bright yellow eyes. In some incarnations he wears a black goatee. Black fur covers his shoulders, wrists and most of his lower body, ending with large feet sticking out. He also has a black tail with a tuff of black fur and a large pair of black wings while in flight.

Amon's skin color has varied over the decades. In some colored variants of the original manga, as well as during the OVA AMON: The Darkside of Devilman, Amon's skin color is red. However most incarnations, including Chibi Chara, Devilman vs Getter Robo, Devilman Grimoire and Cyborg 009 vs Devilman, portray Amon's skin as being a dark teal. This is due to the popularity of the first anime series in which Devilman was teal.

True to his nature, Amon is an incredibly uncontrollable, splenetic, and berserk demon who fights against any and all who cross his path. In Amon's most extreme moments of bloodlust, he is shown to have little to no regard for the safety or wellbeing of any of his own species, a disturbing trait proven fact when he was shown cannibalizing Yumi during his rampage. Amon is also extremely selfish, arrogant, and egotistical, always looking for the strongest opponent. However, his personality trait proves to be extremely detrimental and injurious to his plans as Amon can easily underestimate his opponents and results to taunting or belittling them. 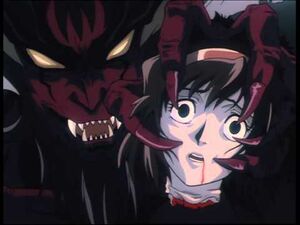 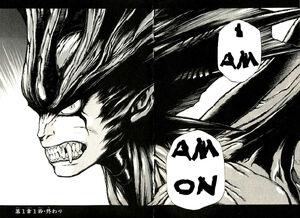 Amon in the manga. 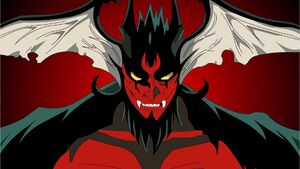