Jumping in and out of the earth

The Amorbis are arena bosses and antagonists in Metroid Prime 2: Echoes.

The Amorbis are three possessed Sanddigger worms, which the Ing had possessed and used against Samus. The Amorbis are first seen lying inert in the Dark Agon Temple on Dark Aether. When Samus uses the Keys to unlock the Temple gate, the Amorbis are possessed, and jump up and begin the fight.

During the fight the Amorbis will use their armor to attack and defend themselves. They spit out lasers of dark magic which can seriously damage Samus if they hit her. Because there are three possessed worms, the battle is doubly difficult due to all three attacking Samus at once.

Samus will have to blast missiles at the Amorbis' head armor to damage them, and then they will fall to the ground inert and Samus can roll in their suction filled jaws when in the Morph Ball form. Once inside, Samus must lay a bomb, which will chew off a large amount of the Amorbis' health.

When the Amorbis is nearly defeated, they will go through a large amount of jumping around the earth, and become faster and much difficult to fathom where one will appear next. When all three are grouped around the Dark Sphere, Samus must bomb each Amorbis' head armor until vulnerable. When all three heads have been bombed by the Morph Ball, two worms will mysteriously vanish into the sand while the main one crumbles into ash.

All that is left of the Amorbis is the Dark Suit, which will protect Samus further from Dark Aether's atmosphere.

Because of the rapidity of the fight, the amount of damage taken when hit by the Amorbis (which can happen a lot) and the distance it takes to get pick ups, and the toxic atmosphere of Dark Aether as well as the few Energy Tanks available before the fight, this, along with the Boost Guardian, is considered a really difficult boss, but easy enough if one is fast enough. 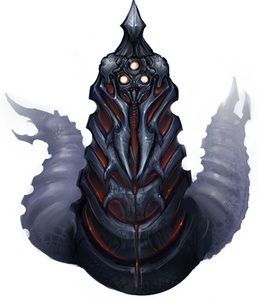 The Amorbis covered in dark armor. 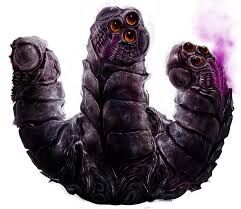 Retrieved from "https://villains.fandom.com/wiki/Amorbis?oldid=3523821"
Community content is available under CC-BY-SA unless otherwise noted.