Villains Wiki
Register
Don't have an account?
Sign In
Advertisement
in: Mature, Game of Thrones Villains, Dark Knights,
and 30 more

Ser Amory Lorch is a supporting antagonist in the A Song of Ice and Fire book series, and a minor antagonist in its TV adaptation Game of Thrones. He is a landed knight of House Lorch of the westerlands and a bannerman in service of House Lannister. Being a landed knight, he has his own land and keep. He is related to the current head of House Lorch, Lord Lorent Lorch. He is regarded as a cruel, simple, small man. He is infamous for his role in the butchering of Rhaegar Targaryen's children alongside Gregor Clegane, stabbing Rhaenys Targaryen to death near a hundred times.

In the TV adaptation, he was portrayed by Fintan McKeown.

According to semi-canon source, Amory threw the last Lord Tarbeck, a 3-year-old boy, down a well for Lord Tywin Lannister during the Reyne-Tarbeck rebellion.

During the Sack of King's Landing Amory Lorch is the one who killed the three-year old Princess Rhaenys Targaryen. He dragged her from her father Rhaegar's bed in front of several Lannister men and stabbed her dozens of times. This made Lord Tywin angry, as he didn't want it to be public. He thinks Ser Amory is an idiot, and wanted him to kill the child with a pillow after calming her with sweet words.

Ser Kevan Lannister orders Ser Amory to forage and burn the riverlands, along with Ser Gregor Clegane and Vargo Hoat.

Amory's raiding party encounters and attacks Yoren's group of recruits for the Night's Watch at the town by the Gods Eye. Although the town was already destroyed and the keep abandoned, Amory ordered Yoren and his group to open the gates in the name of King Joffrey I. Yoren didn't trust the knight and refused, causing Amory to storm the keep. Many die in the ensuing fight, including the animals. Amory kills Yoren and captures most of the surviving prisoners, including Rorge, Biter, and Jaqen H' ghar. However a group of criminals manage to hide from Amory's men, and Arya flees with Gendry, Hot Pie, and the toddler Weasel, bringing also the injured boy Lommy Greenhands, whom Arya refused to abandon. Amory's attack was unprovoked and unnecessary as the Night's Watch takes no part in the wars of the realm. Amory eventually gets tired of waiting for the other group of criminals to leave the tower and decides to let them and bring his prisoners to Harrenhal. Gendry's group is later captured by the Mountain's men.

Lord Tywin orders to Ser Amory, Ser Gregor, and Vargo Hoat to hunt down the outlaws of the Brotherhood without Banners, who are seen as the true heroes by the smallfolk. Every time Amory and the other men go out in the riverlands to fight battles against the outlaws, the rivermen, and the northmen, but return without succeeding the task of disbanding the Lord Beric Dondarrion's outlaws. During the war, Amory captures two innocent smallfolk, a beekeeper and his wife and threatens far and wide to hang them if Lord Beric Dondarrion does not surrender to him. When Beric surrenders, Amory hangs the beekeeper and his wife anyway with Beric strung up in the middle. Beric is later resurrected by Thoros of Myr. Despite all the times Beric has been reported to be dead, the Lannister forces keep meeting him again.

King Robb Stark's army is invading the westerlands and Tywin decides to leave Harrenhal with his army. Amory is made castellan of Harrenhal by Tywin when Tywin takes the majority of his army, including Ser Gregor, west to deal with Robb, and later east to engage King Stannis Baratheon, after Ser Edmure Tully manage to chase them away, causing the Mountain to flee from Stone Mill. Amory and Vargo hate each other and this causes the Brave Companions to turn cloak to Robb's cause. While castellan, Amory drinks a great deal of the best wine in the castle's cellars.He is eventually captured by Lord Roose Bolton when Roose persuades Vargo Hoat to betray House Lannister and to seize control of the castle. After the fall of Harrenhal, Amory is paraded naked before Roose and Vargo. Pleading and sobbing, he is kicked into the bear pit to be killed by the bear inside it. Arya Stark is present during his death.

When the war winds down, Tywin tells his son Tyrion Lannister of his plan to blame the deaths of Princess Elia Martell and her children entirely on the deceased Amory (despite he only killed one the 2 children), to circumvent giving Gregor Clegane over to Prince Oberyn Martell, who comes to King's Landing to seek justice for their deaths. This plan fails however, when Gregor confesses his crime in front of the entire court during Tyrion's trial by combat.

In the riverlands, Ser Roger Hogg tells Ser Jaime Lannister how Amory attacked his towerhouse at Sow's Horn even though he was sworn to House Hayford, who are sworn to King's Landing and never helped the Starks, the Tullys, or Beric's outlaws. 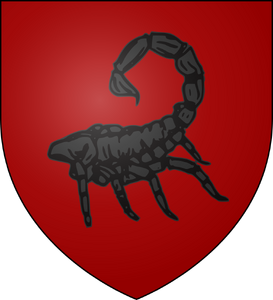