Make profits with the help of Roulette (successful, later sabotaged).

Amos Fortune is a luck-based villain from the DC comic series. He is the head of the Royal Flush Gang.

Before his life as a crime lord, Amos Fortune was a gang leader in his youth. In his later adult years, he became obsessed with luck. He soon discovered the existence of the fictional "luck glands", which determines a person's luck. He later learned how to control luck glands, and he used this to to manipulate his luck.

Once gaining his new-found powers, he reassembled his old gang members and began battling with the Justice League. When the professor first met them, he tried to remove their good-fortune, but was unsuccessful. He was a primary villain of the Justice League until he later abandoned the gang once more.

When Parademons blew up the House of Secrets, Fortune suffered injuries, but survived. However, when he joined Scarecrow from escaping Enclave M, he was thrown from the Secret Six's helicopter by Knockout, after calling her lover, Scandal, a "moronic slut."

Fortunately, Amos survived the helicopter crash, and devised a plot against the league with the aid of The Wizard. As part of his plan, he had the Wizard assist him in luck magics, and he used the hero Wildcat as a pawn after brainwashing him.

Wildcat grew stronger with each victory over a JSA member via the luck magic. Vixen and Gypsy helped Stargirl when she went to face him, given they had faced him years before when they were just recruits.

After freeing Wildcat, Stargirl absorbed Amos's luck magic energy with her Cosmic Rod's, causing him to balloon to tremendous size before exploding.

Amos later recruited his gang again and began making major profits with the power of his new sidekick, Roulette. She too ran a gambling operation. Together, they sent their goons out to major money making facilities, such as casinos. During this time, Fortune became more hostile, now killing even his own employees.

He would do so by setting up a switch in their gear that would kill them once he flipped it. After being confronted by the Justice League yet again, he just barely managed to get away.

He escaped to a river boat on the Mississippi River, but was shot down by a widower of one of his goons that he had killed.

In the Smallville series, Amos took the role of a Casino host at a bachelorette party. One of his vehicles had been stolen by a magically intoxicated Clark, who also stole his pet lemur. Believing Emil Hamilton to be responsible, he had his minions capture him. When Emil refused to tell him that he took it, Amos ordered him to be killed.

Later that day, Amos was confronted by Lois and Oliver over Lois' engagement ring she lost to him the night before, but he refused to return it. In turn, he had them both captured and tied up in the back room, while he stayed to take in a show.

Oliver and Lois manage to escape their bonds and disguise themselves as showgirls. As Oliver passes in drag, Amos Fortune becomes infatuated with him and comments on how good he looks.

Later Chloe arrived at the casino where Amos recognized her and yells that she was part of the group that stole his money. Chloe was confronted about the theft of his vehicle. As a fight broke out, Lois managed to get her ring back from Amos, but was caught and choked by him. During the brawl, Oliver was able to get the ring back and knocked Amos unconscious.

Amos appears to be a middle-aged Caucasian man, sometimes having hair and sometimes not. His attire consists of elitist clothing branded with symbols relating to playing cards. Other times, he is seen wearing a white robe with other symbols on it.

Most of Amos's personality revolves around the idea of luck, and how he loves to manipulate it. He is very selfish, willing to go so far as to kill those who do not obey or cooperate with him. He surrounds himself with symbols relating to games that revolve around luck, such as playing cards. 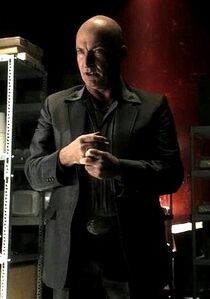 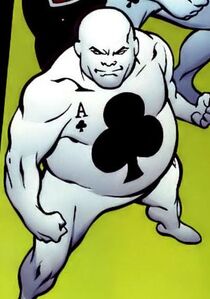 Amos is a clubs outfit. 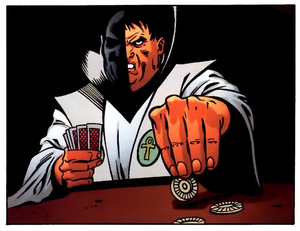 Amos with only half his face visible.

Amos with a card over his eye. 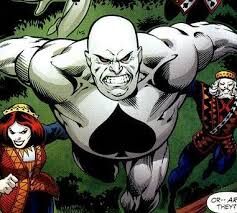 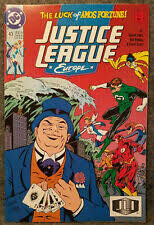 Amos on a comic book cover.