The Fox and the Hound

Hunt down Tod by any means necessary (failed; formerly).

Amos Slade is the main antagonist of Disney's 24th full-length animated feature film The Fox and the Hound (which is based on the 1967 novel of the same name by the late Daniel P. Mannix), and a minor character in its 2006 midquel The Fox and the Hound 2. He is Tod's former archenemy, Widow Tweed's neighbor and Chief and Copper's owner, master and boss.

Unlike most Disney Villains, even though Amos is a hunter, he does not come across as being evil. Instead, he just hunts for a living and is very professional at it, until he gets motivated by revenge: in fact, if Amos had not broken wildlife laws and entered a sanctuary with the intent of illegally hunting down and killing Tod, he would barely qualify as a villain at all. In the end, his foul temper and desire for revenge would cause him to cross the moral and legal boundaries, though he would soon regret doing so.

In the first film, he was voiced by the late Jack Albertson (in his last theatrical film role). In the midquel, he was voiced by Jeff Bennett, who also voices Owen Burnett and Malibu in Gargoyles, Ozzy in The Land Before Time II: The Great Valley Adventure and Jacques von Hämsterviel in the Lilo and Stitch sequel films.

Amos is a crabby, mean, grumpy, cranky, argumentative and bad-tempered man. However, despite his impatience, he does care about his two hunting dogs named Chief and Copper. Later, Amos reforms after Tod saves him and Copper from a dangerous bear.

The Fox and the Hound

Amos is Widow Tweed's bad-tempered neighbor and is known to be a hunter. At the beginning of the film, he is seen when he has a surprise for his hunting dog named Chief, and the surprise is shown to be a hound puppy called Copper, and Amos said that Copper is someone for Chief to look after from now on, but Chief is shown to dislike him, but grows to like him later on. He doesn't like it when Copper wonders off, so he often has to search for Copper, who meets a fox named Tod, who lives with Widow Tweed. After Copper plays with Tod a couple of times, Amos finally ties up Copper at his doghouse to prevent him from wondering off again. When Tod arrives at Amos' house to see Copper, Chief alerts to his master, Amos, there, is surprised when he sees the young fox is on his property. Amos accuses the fox of chasing after his chickens, because of this, Amos tries to kill the young fox. Tod is able to escape, as he jumps into Widow Tweed's truck as Amos follows them. Widow Tweed stops her truck as she confronts Amos for trying to kill Tod as she angrily grabs Amos' gun and then uses it to shoot Amos' radiator on his truck. Amos threatens to kill Tod as he says to Tweed that he will blast him if he ever catches him on his property again.

After that, Amos takes both of his dogs, Copper and Chief on a hunting trip. By springtime, Amos has collected a lot of skins and trophies with the help of a grown up Copper. Amos, Copper and Chief later return, and as Tod comes to see Copper again, Amos sees Tod again and tries to kill him once more. Chief helped Amos chase Tod to a railroad bridge, as Chief traps Tod onto the bridge. Suddenly, a train comes. As Amos tells Chief to jump, Tod escapes, but Chief falls off the bridge by the train hitting him, causing him to be injured badly, and suffer a broken leg. Amos and Copper accuse Tod of making Chief get hit by a train, and both Copper and his master, Amos want revenge on Tod by killing him, while Tod safely returned to his owner, Widow Tweed. Suddenly, Amos marches to Tweed's house and attempts to kill Tod who is hiding, but Tweed is able to close the door and lock it to stop Amos from killing the fox, but Amos tells her that she cannot keep Tod permanently locked up.

To protect Tod from Amos, Tweed takes him to a nature preserve, believing he will be safe there since hunting is not allowed. This does not deter Amos, who is determined to avenge Chief's near-death. As Amos and Copper see Chief making a fuss over his injured leg to get attention, Amos threatens to break Chief's other leg, causing him to whimper. After that, Amos shows Copper his plan to catch and kill Tod as he shows him a trap, that traps a twig with a loud snap. After that, he breaches the nature preserve with Copper and sets multiple traps as Tod wanders along a forest path. As Amos uses his gun and tries to shoot Tod, Tod's ear perks up, causing him to step backward, and that's when he barely escapes from the traps. Amos and Copper chase Tod and his girlfriend, Vixey. Tod manages to distract Copper by engaging him in a fight before returning to the foxhole. Amos puts fire in the den, while he and Copper wait at the other end. However, Tod and Vixey escape through the flames. As Amos continues to follow Copper chasing the two foxes, he and Copper accidentally antagonize a giant grizzly bear, who suddenly appears. Amos shoots the bear with his gun out of fear, but it only hurts the wrathful animal. Because of this, the infuriated bear now attacks Amos and swipes his gun out of his hand, causing Amos to end up falling. While trying to escape from the vicious bear, Amos is caught on one of his own traps and has lost his gun, that is caught on a small tree and landed slightly from his reach. However, Tod and Copper intervene and save Amos by fighting the bear, thanks to their joint effort.

When Tod is gravely injured from the bear attack, Amos tries to kill Tod, only for Copper to defend him. However, Amos suddenly redeems himself when he realizes that Copper proved that he and Tod are actually friends, as he is standing in the way of the gun. Amos eventually decides to return home as a slightly better man, while Widow Tweed fixes his injured leg, causing him to complain about his leg as his two dogs watch. It is possible that he learned his lesson about foxes being different from people.

The Fox and the Hound 2

Amos Slade appears as a minor antagonist in the midquel. He appears when he was wondering where Copper was because Copper needed a hunting lesson. After Copper talks to Chief, Amos finally found Copper and told him to howl causing an apple to fall on his head. Amos and Chief tried to chase after Tod and kill him, but then a bucket of milk fell on Amos' head causing him to ride on Widow Tweed's cow, Abigail causing Tweed to scold Amos. After that, Amos was thrown in the mud, and Widow Tweed threw a pie at his face. Amos scolds Copper for failing at being a hunting dog. Slade and his oldest dog, Chief enter the fair for a hunting dog contest, where Chief takes another ribbon which is fourth place for the second time which makes him seem to think makes him the champion hunting dog in the county.

He tries to look for Copper when he left Amos' house to join the Singin' Strays. Amos and Chief were being lead by Tod to the Singin' Strays' performance. Amos reveals that Copper is his dog, not a stray causing Cash to scold him and fire him. After Copper gets fired, Amos takes him back home.

Amos appears during the climax of the film as he was enjoying some pie with Widow Tweed at her house until they were interrupted as Chief, Tod and Copper caused a chase causing Tweed and Amos to fall. Because of this, Widow Tweed angrily attacks and hits Amos with a broom. 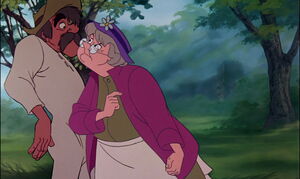 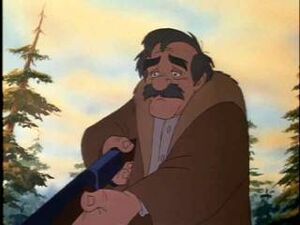