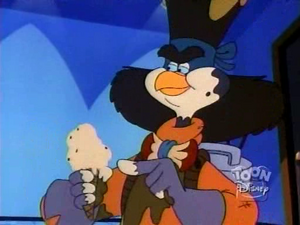 Ample Grime is a minor villainess from Darkwing Duck, appearing only in the episode "Dirty Something".

She is the younger sister of Ammonia Pine, and like her sister she is also a FOWL agent. However, she is the complete opposite of Ammonia, loving dirt as much as her sister loves cleanliness, though it is not given a reason why. Strangely, Ammonia is quite protective of her sister.

The High Command sent her to team up with Ammonia to rob the city of all money. The plan was for the two to create a machine that would shot sticky sludge at the victims, then use a vaccuum to suck them of all their money. Though the plan was quite simple, Darkwing had difficulties fighting the duo due to Gosalyn having sold all of his equipment for recycling. DW was then forced to improvise by constructing a vehicle out of junk parts. He eventually foiled their plans, leaving the two to bicker among themselves while their machine exploded.