Getting Killer Frost back to work for her

Selling technology on the black market

Amunet Black is a major antagonist in the fourth season of The Flash, appearing as the nemesis to Killer Frost.

Amunet is a powerful crime lord in Central City. Despite her quirky attitude, she is a ruthless and cruel gangster and is feared in the criminal underworld. She appears to be a meta-human with the power of magnetokinesis, allowing her to control and shape all kinds of metal. She has several henchmen, including Norvok and - temporarily - Killer Frost.

She is portrayed by Katee Sackhoff, who also voiced Bo-Katan Kryze.

Before developing meta-human powers, Amunet worked as a stewardess. On the night of the particle accelerator explosion in Central City, she was touched by the dark matter and gained the power of magnetokinesis.

Amunet is a power to be reckoned with in the criminal underworld of Central City. She sells stolen technology in the meta-human black market and is also willing to sell humans as well. She is eventually contacted by Caitlin Snow, who fears that her Killer Frost persona is returning and wants to buy power dampening technology from Amunet. Amunet agrees to a deal, however, in return Caitlin must join her and work for her. Caitlin agrees and starts working for Amunet in one of her bars. Overtime, Amunet started to rely on Caitlin and even considered her her favorite henchman.

However, Cisco Ramon can convince Caitlin to join Team Flash once more. Caitlin quits working for Amunet, despite Norvok threatening that it will have consequences, and leaves the bar. Norvok swiftly informs Amunet about it and Amunet decides to take action. A few weeks later, Caitlin is a guest at Iris West's bachelorette party. They are interrupted by Norvok, who threatens the group. As a result, Caitlin turns back into Killer Frost and heads into one of Amunet's nightclubs. Amunet is delighted and welcomes Killer Frost. Although Amunet acts jovial and girly, she soon gets colder when Killer Frost states that she wants to leave the organization. She claims that she doesn't ask - she simply takes - and tells Killer Frost to come along as she has an idea that could turn both of them very rich.

Amunet leads Killer Frost into the basement where a man is chained up. Amunet reveals that the person is a meta-human she calls the weeper and that his body is creating a powerful drug through his tears. Amunet has been selling the drug in her nightclub already, but now wants to expand into the city. She wants Killer Frost to be her protection and even offers her 15 per cent of the cut. Killer Frost refuses but Amunet claims that she seems not to be realizing who really has the power in the room. She is referring to a bucket filled with sharp metal shards that Amunet is about to levitate with her powers. Caitlin prepares for battle herself but before either of them can attack, Iris West intervenes, having followed Caitlin to Amunet's club. Amunet is surprised to see Iris and is even more surprised when Iris can convince Killer Frost to come with her. After the two have left the club, Norvok asks whether he should stop them. Amunet replies that he should not, she wants Killer Frost to think that she can run away from her.

Killer Frost plans to leave town the same night but when she is waiting for the person to smuggle her away, Amunet appears instead - having carried her metal bucket with her. Amunet attacks immediately, forming a metal glove out of the shards and firing parts of it at Killer Frost. When Killer Frost blasts ice at her, Amunet deflects it by transforming the glove into a metal shield. After knocking down Killer Frost, Amunet brutally beats her with the metal glove immediately until she is knocked out. Before Amunet can land more strikes, a police car arrives and the police officers force Amunet to surrender. Amunet kills both men by shooting metal shards into their bodies. However, when she turns around to finish off Caitlin, she finds that Caitlin has escaped.

Iris and the other women on the team decide to stop Amunet before she can unleash her drug onto the city. They follow Amunet to a steel mill where Amunet reveals her new drug to a potential customer. After offering the customer a sample, the man agrees to buy the drug off of Amunet. While they try to stop the deal, Iris and Felicity are captured but are saved when Caitlin arrives and offers to work for Amunet if she leaves the two go. Amunet reveals that over the years, no one testified against her because they were not alive to do so. She refuses Caitlin's deal and orders her men to kill everybody. However, Caitlin transforms into Killer Frost again, causing Amunet to don her metal glove and attack Caitlin herself. However, while she does so, Cecile hacks one of the magnets inside the factory and thus disarms Amunet. Killer Frost then creates an icy dagger and plans to kill Amunet with it but Iris manages to talk her out of it.

Killer Frost lets Amunet go and before she leaves, Amunet warns Killer Frost that in the future, she will ruin something Killer Frost holds dear as payback for Killer Frost ruining this deal for her.

In order to save one of her meta-human slaves, Dominic Lanse, who has been shot and is in a coma, Amunet sets out to find Caitlin once more. Tracking her down to the coffee shop Jitters, Amunet blasts open the shop windows and enters the store. She disarms Harry Wells and then approaches Caitlin. While Caitlin tries to transform into Killer Frost, Amunet swiftly catches her and puts a meta-human dampener on her hand. She claims that she has not come for Killer Frost but for Caitlin and kidnaps her.

She brings Caitlin to her hideout where she shows her the comatose Dominic. She reveals that Dominic is a meta-human and her new golden goose but that he tried to get away from her and he shot him with a metal shrapnel which is now buried into his head. Amunet reveals that she wants Caitlin to fix Dominic, although Caitlin claims she cannot do it in the unsterilized environment and with this ancient technology. However, Amunet tells Caitlin that she will kill her in case of Dominic's demise.

However, Caitlin instead teams up with Dominic whose tranquilizer has worn off. As Dominic is able to read minds, they manage to move past several guards unseen. However, eventually the corridor in front of them is blocked my a metal wall and Amunet appears behind them rather angry. She leads the two back to the lair and while the guards take Dominic back with them, Amunet holds Caitlin back. She accuses Caitlin because she does not appreciate all she has done for her. She wants to know why Caitlin tried to run away just now and Caitlin reveals that she did it because she tried to save Dominic but failed. Amunet then reveals her past to Caitlin and comes to the conclusion that only by developing her powers, she became "someone". Caitlin, on the other hand, has always been smart and resilient and Amunet reveals that this was the reason she turned to Caitlin to save Dominic - she is more than certain that Caitlin can do it.

She forces Caitlin to go through with the procedure and stands right by as Caitlin performs the surgery. Her bag full of metal shards stands right nearby, as a precaution. When Dominic suddenly spasms and his heart stops beating, Amunet panics and orders Caitlin to save him. However, she suddenly feels a faintness and her guards drop down as well. Just moments before she faints, Amunet realizes that Caitlin has unleashed the inhalation anesthetic into the room, affecting everybody except her and Dominic, who both wear masks. Also, Dominic's heart hasn't stopped, it was just a distraction. Caitlin and Dominic rush out of the building but Amunet somehow regains consciousness and pursues them. She hurls metal shards after them but misses and alerts the two. She fires three more shards, aiming for Caitlin's body, but suddenly Ralph Dibny and Cisco Ramon show up. Ralph catches the shards with his elastic body and Cisco blasts Amunet with his vibe powers, taking her out. Before Amunet can recover, the four flee through a breach created by Cisco.

However, later that night Amunet tracks down Dominic in Central City and knocks his head into a car window. She delivers the unconscious Dominic to a rooftop.

After the warden of Iron Heights prison has realized that his inmate Barry Allen is the Flash, he contacts Amunet Black, with whom he seems to have made business before - selling her the meta-humans from his prison. Amunet is delighted to hear that the warden has another slave to sell. 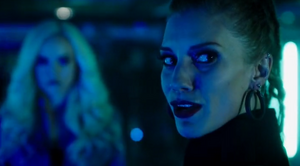 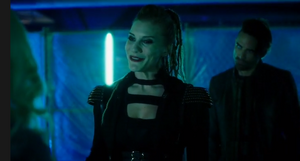 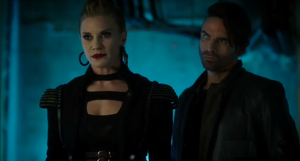 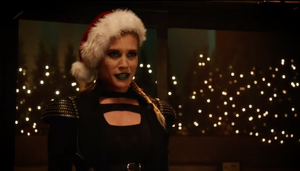 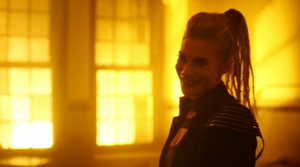 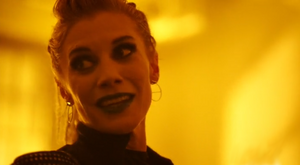