The Evil Twin, Samey and Bossy Blonde Cow (by Samey)

Amy is a contestant and the minor antagonist in Total Drama Pahkitew Island. She is the cruel, stuck-up, and abusive twin sister of Samey, and she frequently tries to take credit for ideas Samey comes up with.

Along with Samey, she was voiced by Bryn McAuley who also played Taylor from Total Drama Presents: The Ridonculous Race.

Amy, along with the rest of the new cast, debuted in "So, Uh This Is My Team?". She was first seen on the zeppelin, with the rest of the new cast, being disgusted by Beardo's beat boxing. She quickly makes Samey switch seats with her, until she sees the "giant", Jasmine, and makes Samey switch back. When Chris forces the cast to jump out, Amy was lucky enough to get a bag with a parachute, and quickly kicks a struggling Samey off of her, leaving her to fall. To her disappointment, Samey had a parachute, however she gets enjoyment after using Samey to break her fall. Amy, along with the rest of the contestants with parachutes, was placed on team Pimâpotew Kinosewak. During the challenge, Amy was assigned to help Samey and Rodney put wood in the wheel barrel, however she and Samey weren't that helpful, as Amy just used Samey as a human shield to protect from Chef's tennis balls.

It's hard to tell Amy's role in making their home, because Pimâpotew Kinosewak was not shown making their shelter, but she was shown happy when they won the challenge. However, later in the episode "Twinning Isn't Everything", she costs her team the challenge and manipulatively got everyone except Jasmine to vote for Samey, but her plan fails since Samey tricks her into eating a deadly green apple and tricks Chris into thinking she is Amy, causing her elimination which she was not as happy about.

In "A Blast from the Past", Amy returns to the island looking like a zombie, which scares Shawn for most of the day. Eventually, she confronts Samey and they both fought each other until they both got shot out of the cannon together by Chris. 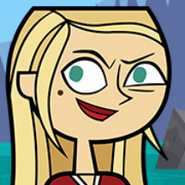 Amy with her sister, Samey.

Amy in the cannon
Add a photo to this gallery

Retrieved from "https://villains.fandom.com/wiki/Amy_(Total_Drama)?oldid=3165539"
Community content is available under CC-BY-SA unless otherwise noted.