Amy waiting for Nick to leave the house to set up the crime scene.

Amy spilling her blood extracted on the floor simulating a loss of blood.

Amy leaving North Carthage with the assurance that the cops will discover the crime. 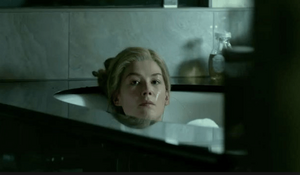 Amy planning to fake a pregnancy with the urine of her pregnant neighbor. 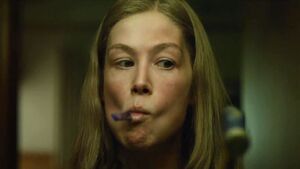 Amy preparing to hit herself in the face with a hammer.

A billboard of Amy.

Amy surprised after Nick through the television asked her to return with him.

Another look of shock.

Amy planning to frame Desi of kidnapping and rape. 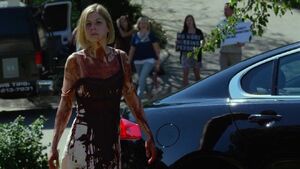 A bloody Amy returns to Nick.

Amy lying to federal investigators and evading arrest with her invented story.

Amy ordering Nick to go to sleep after she discovered him leaving the house.

Amy asking Nick to trust her.

Amy telling Nick that he will only be happy with her.

Amy smiling after having gained control of her marriage. 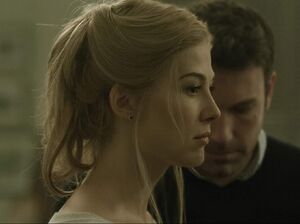 Amy Elliot and Nick Dunne.
Add a photo to this gallery
Retrieved from "https://villains.fandom.com/wiki/Amy_Elliot-Dunne/Gallery?oldid=3263845"
Community content is available under CC-BY-SA unless otherwise noted.