Destroy Baby (failed, but later abandoned).
Escape from Walter Park's prison and make all of the inmates despair. (succeeded).
Make Iruma despair.
Kill and eat Iruma.
Expose the truth that Iruma is human to the demon world (all ongoing).

Amy (Ami) Kirio is one of two main antagonists (alongside Baal) of the anime and manga series Mairimashita! Iruma-Kun/Welcome to Demon School! Iruma-Kun!.

He is a psychopathic demon who likes to cause despair to anyone and is the (one-sided) archenemy of Iruma Suzuki. He serves as the main antagonist of the Batora (Battler) Events arc and the overarching antagonist of the Walter Park arc

When his magical capacity was evaluated, Amy saw that he was sent to the Demon Children Garden by his worried family upon assuming that he possessed little to no magical abilities. It was there that Amy was the receiver of the institution's harsh environment and was relentlessly bullied for "dirtying" his family's line.

It was there that he met a girl who was similar to him in terms of magical capacity. She allowed him to touch her charm, an earring that was passed down to her by her grandmother. That was until Amy's bullies grabbed it and despite his efforts of saving it by using his barrier ability, the earring nevertheless shattered, bringing despair to the girl. After the girl quit the facility, Amy realized that he loved to see the despair radiating from others, deciding to further indulge in harming his victims.

Amy appears to Iruma as the founder of the Battler Club Magical Tools Research Division President when Iruma's ring connecting with his choker due to being made of the same material. From there, Iruma decides to join Amy's Battler due to their many similarities, along with Asmodeus Alice and Clara Valac. He also shares his dream with Iruma of aspiring to make a magical tool to eradicate the gaps in the power ranking of demons. He plans to do this through a magical device called the Gabu-ko. Iruma assists him with it by reassembling a heart-shaped device for the machine.

In reality, Amy is secretly working with a member of the Thirteen Crowns of the netherworld Baal (whom he terms as his "bro" in front of Iruma and his friends) and their plan is to destroy Babyls during the Battlers Events. At the central plaza where the Bell of Ceremonies is situated, Amy intends on trapping a massive chunk of the students and their families inside of the building with his barrier ability which would result in major casualties.

It is also revealed that Amy was faking his weakness, as while he was legitimately a weaker level demon, he exaggerated is super-fragility profoundly to take suspicions off himself. Unlike other demons, Amy is also extremely perverted when it came to pain and suffering with him taking immense gratification from the suffering that he inflicted on his victims and also his own suffering as well.

His plan would end up failing because of Iruma's interventions.

After the Batora arc, Amy was imprisoned in the underground prison of Walter Park. In the prison, Amy acts as a weakling. Later, a group of prisoner planned to escape from the prison by ask for help from the terrorist group named "The Six Fingers" and the only one who contact with them is Amy. The Six Fingers terrorize Walter Park by release trio of magical beasts to destroy Walter Park and let the prisoners escape in the chaos. Luckily, Iruma and his friend are in the park and defeated all magical beasts. In the escape plan, all of the prisoners can't escape except Amy. Amy revealed to all of his inmates that he is the leader of the Six Fingers. Amy mocks them, claiming that they are the idiot puppets in his plan, making all of the inmates despair. Later while escaping, Amy sees Iruma and realizes that Iruma saved the park. As Amy prepares to confront Iruma, a phone call from Baal interrupts him and tells him to return to the base. Fascinated by his sadist side and feelings for Iruma, Amy believes that he and Iruma are archenemies. Amy now swears that he will be the archenemy of Iruma.

Baal gets the conversation record from Ocho, who got intimidated by Kirio because of his jealously at Ocho that he saw Iruma's desperate face. Before Kirio could do anything on Ocho, a record revealing Iruma's confession that he is human. Now Amy has a new hope for make Iruma despair by killing and eating him while taking delight on seeing his desperate face. Baal along with Amy and the Six Fingers are now preparing to hunt Iruma.

After the Music Festival ended. Asmodeus Alice came into the Magical Tools Battler Party room after he heard a mess inside the room and gets upset thinking that Elicos Schenell caused the mess, and shocked that the noise owner is Kirio. Kirio told Alice to talk with him for a while, in the conversation, Kirio thanks them for taking care of the Magical Tool Research, Asmodeus then tells that it was all thanks to Iruma's effort and that since Kirio's absence a lot of things happened and that Iruma managed to become Rank He (5) during the Music Festival. In the conversation, Kirio says that "Asmodeus is like a map, always besides Iruma guiding him with his flames, always lighting the way, and it was obvious that Iruma could get so far while Asmodeus is beside him". Asmodeus gets happy with what Kirio said, and tells that he wants to meet Iruma if he had enough time. Kirio also wants to meet Iruma . Asmodeus notices Kirio's eyes and attacks him with his flames, however Kirio blocks the attack with his Bloodline's Barrier. Asmodeus explains that Balan-sensei showed him and Sabro what a Devil in the Evil Cycle Period who has Returned to The Origin looks like, and that Kirio has the same eyes as him and asks what he is planning to approach Iruma with. 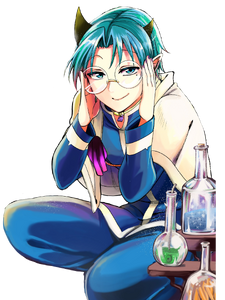 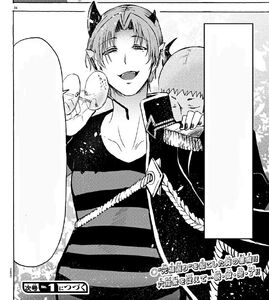 Kirio as leader of the Six Fingers. 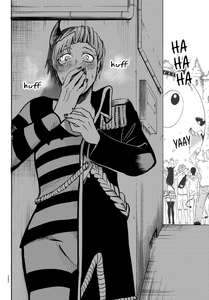 Kirio after seeing Iruma in the park. 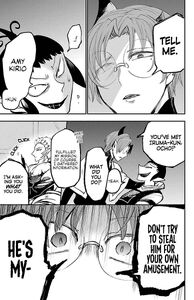 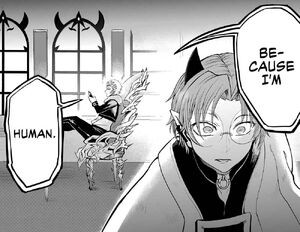 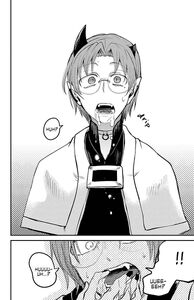 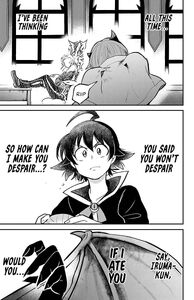 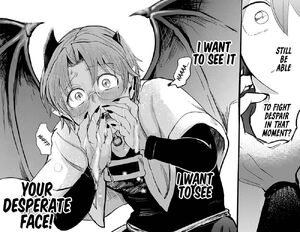 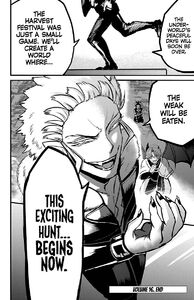