To keep Raphael protected and live a happy life with him forever.

She also makes her return in the reboot video game Soul Calibur VI.

In Soul Calibur II, Amy was a poor orphan who lived on the streets of Rouen. Her parents died of a plague that spread across all of Europe during this time period. She had no other family to go after the loss of her parents. One day, she came across a man named Raphael Sorel, who was being chased by the local authorities. She hid Raphael from the soldiers who were pursuing him; though only in spite of the soldiers, who ran her poverty-stricken town. As Raphael had never owed his life to anyone before, he felt he had to protect and repay her. He felt something he never had before for Amy, so he took her into his home and looked after her as his own daughter, to repay her for the kindness she had shown to him.

Raphael had left her, left this castle home behind. She knew he had done it for her sake because he wanted her to be happy more than anything else in the world. She understood, nevertheless she was restless without him.

Amy recalled the days before they arrived in those lands when they had lived in the west. And she remembered the day he had returned from a long journey. He had collapsed on the floor at once, having incurred deep wounds. Far from ordinary wounds, these were infected and gave off a strange stench. After several days they showed no signs of healing. When she tried to clean the wounds, the viscous fluid that stuck to her skin was the wrong color: a baleful shade close to black.

By the time he began to recover, the aberrations had spread over his whole body, as well as to the girl who had nursed him. The shadows that had seeped out of the darkness had stained them the same color. This was the power of Soul Edge, a phenomenon called "malfestation". Amy understood that the two of them had stepped beyond the boundaries of humanity.

"Be a good girl. I'll be back in a while." Those were the last words to her, but Amy had to ponder them for a moment. Even the most dutiful fledgling takes flight when the longing for its parents grows too strong.

(The cursed sword, Soul Edge. Did he leave in order to find it again?)

Silently, with all her feelings tucked away where none could read them, Amy pushed open the door, in search of Raphael.

In other characters' storylines

In Soul Calibur III, she appears on both of Raphael's endings, if the player doesn't press the buttons, she will appear with Kilik, if he does, Raphael will return to her.

In Soul Calibur IV, she appears in Kamikirimusi's Story Mode alongside Auguste and Jacqueline. She also appears in one of the Custom Characters' Story Modes, fighting alongside Raphael, Jacqueline, and Marienbard. In Angol Fear's Story Mode, Amy appears alongside Kilik and Xianghua.

In Tower of Lost Souls Mode in Soul Calibur IV, she appears as a boss in Ascend Mode on Floor 52 (Solitary Princess), alongside Raphael, Dean, and Elnathan. She is considered one of the hardest bosses, since she and her allies constantly change places with each other, enabling the one that isn't in the arena to heal.

In Soul Calibur V, a character named Viola appears. She strongly resembles Amy, having her voice, her personality, a similar appearance and no memories. Its speculated that Viola has a relationship with Amy and also that they are the same person, because in the time of Soul Calibur V, Amy has been missing and Raphael has been searching for her, and Viola has no memories of her past, she is traveling with Z.W.E.I. trying to find something to remember it.

This is later confirmed in Soul Calibur VI that Amy and Viola are one and the same person. 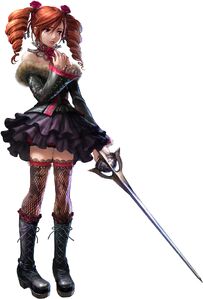