Aaron Helzinger, also known as Amygdala is an inmate at Arkham Asylum that was transformed into a superstrong, yet mindless brute and a villain from DC Comics.

Aaron Helzinger was a man who suffered from homicidal rage and was institutionalized in Arkham. When therapy and drugs could not help him they began using experimental surgeries, most notably the removal of his amygdala, the section of his brain that processes emotions and memories.

The surgery however only caused him to have even less control over his rage and gave him superstrength. Though generally peaceful, Amygdala can easily be manipulated do to his relatively mindless state, making him a tool for other Batman villains.

Amygdala was eventually befriended by Nightwing and became the warden at Lockhaven Prison. Amygdala even became Nightwing's roommate. Unfortunately, a villain named Blockbuster blew up the apartment building. Amygdala and Nightwing survived, but Amygdala went out of control with rage and had to be subdued. Becoming a villain once again, Amygdala joined the Secret Society of Super Villains. 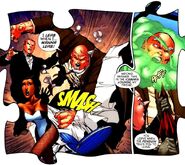 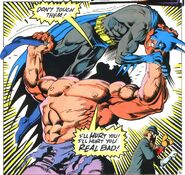 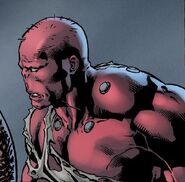 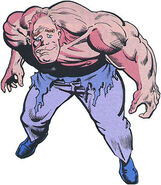 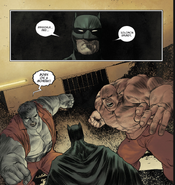 Retrieved from "https://villains.fandom.com/wiki/Amygdala_(DC)?oldid=3952338"
Community content is available under CC-BY-SA unless otherwise noted.