Rise of the Tomb Raider

Use the Divine Source to cure her sickness and become immortal

Ana (c. 1970s-2015) is one of the two main antagonists of the 2015 video game Rise of the Tomb Raider. She is the former lover of Lara Croft's deceased father Richard, sister of Konstantin and a member of Trinity.

She was voiced by Kay Bess, who also voiced Bellroc in the Tales of Arcadia series.

Serving as an undercover agent for Trinity, Ana became Richard Croft's lover, later admitting that she loved Richard, and would have married him if he had asked. After Richard's death she stayed friendly with Lara.

After Lara's return from Yamatai, Lara became obsessed with her father's work. She was visited by Ana, who told her to give up the search, as Ana seemingly worried that Lara was heading down the same self-destructive path that had led to Richard Croft's death. Lara nonetheless continued her research, eventually leading her to Siberia, where the Divine Source was said to be located, the source of eternal life her father was after. However, a book containing Lara's research was stolen by a Trinity agent, leading the organization to Siberia also.

After arriving at her destination, Lara watches Trinity leader Konstantin talking over the radio to someone, claiming that they had problems with the Remnant, but that he now has things under control. The man he's talking to then tells him that "they" will intervene if things go awry, to which Konstantin replies that he was chosen, so things won't turn that way. Before she can learn more, Lara is found by two mercenaries and knocked unconscious. Upon regaining consciousness, Lara finds herself strapped to a chair and is shocked to see that Ana has also been captured. Ana seems afraid and asks Lara what she is doing here, telling Lara to give their captors everything so that they can return home. They are then interrupted by Konstantin's arrival.

The man uses a garotte to strangle Ana, demanding information from Lara. However, when it is made clear that Lara has no knowledge whatsoever, Konstantin stops, instead freeing Ana from her chains. Ana then reveals herself as a member of Trinity. Ana tells her that she knew that Lara would find that place. She offers Lara to work with them, but Lara vehemently refuses to work with her, going as far as to ask Ana whether Trinity recruited her before or after she slept with her father. Ana answers that she loved Richard, but that his idealism destroyed him. She then calls Lara a naive girl who desperately wants to be like her daddy, to which Lara responds by spitting in her face. Konstantin then prepares to shoot Lara but Ana stops him. Konstantin then imprisons Lara instead.

After escaping, Lara spies on Ana and Konstantin, who are watching a map leading to a Remnant village. When talking about Lara, Konstantin implies that Ana got sentimental, to which she enraged asks how he could say that, knowing what she sacrificed for Trinity. Ana then has a violent cough attack, implying that she sacrificed her health for Trinity. Konstantin tells her that she will live when they finally have the Divine Source and reveals that Ana is his sister. Konstantin is then called by one of his men who tells him that he is needed at the cells.

Aftermath of the attack on the Remnants

After Trinity's attack on the Remnant village fails, Konstantin is informed that the villagers managed to defeat his mercenaries and that Lara is with them. Konstantin angrily tell Ana that they should have killed Lara as he intended. Ana responds that he has not made any progress so far and that Lara might be able to find what he couldn't. She then reminds Konstantin that Trinity will intervene if Konstantin continues to fail and that her survival is of no concern to Trinity. Konstantin responds that she will get to Source, as it is god's will. Ana tells him to find the Source, as she is running out of time. It seems that Ana herself does not share Konstantin's faith, merely wanting to obtain the source to survive and not for his brother to fulfill his destiny.

Later, Lara takes Ana at gunpoint after her men have cornered her at an excavation site where they are searching for the atlas containing information about the lost city of Kitezh, hopeful that it will also contain the location of the Divine Source. When Ana gives her men the order to kill Lara nonetheless, Lara shoots an explosive barrel to escape, causing the floor to collapse and both of them fall, with Ana landing on a wooden ledge far above Lara. She tells Lara to think about her offer to work together, to which Lara responds by shooting her in the shoulder. Ana stays to tell Lara that something is slaughtering her men down there, and that Lara will not succeeded if her men didn't. She then warns her men through the radio that Lara is coming.

After his men steal the Atlas from Lara and capture Jonah, Lara travels back to the Soviet gulag, where she expects Jonah to be imprisoned. While Lara is on her way, Konstantin and Ana get the location of the Divine Source out of the Atlas. Konstantin tells Ana that he will tell the men to start the excavation. Ana mentions the Undying Ones guarding the Source and asks whether the men know what is expecting them. Konstantin dismisses the thought, claiming that the men are ready to die for the cause if needed. Ana then shows doubts, telling Konstantin that Trinity is merely using them and might not let him get the Source. Konstantin disrupts her, telling her that he wasn't chosen by Trinity but from God himself and that he will lead God's immortal army after he has located the source. Konstantin then leaves to interrogate Jonah.

Having found out about the Trinity base while listening to the militia's radio messages, Lara heads to the weather station. While climbing the weather station, Lara can find an audio diary of Ana, where she describes how she created the stigmata of Konstantin when they were young, cutting him while he slept and whispering into his ears. She justifies it with giving purpose to her brother's live. Konstantin believed this to be the work of God, as Ana expected. At the top of the weather station, she takes the Atlas and then heads to the gulag to save Jonah.

After Jonah has been stabbed by Konstantin, Lara is even more determined to find the Divine Source, because it is the only way to save Jonah's life, Lara follows the map she saw in the atlas and ventures to the hidden city Kitezh, where the immortal guards of the prophet are still guarding its treasures. After Lara has fought her way through the Undying Ones, Trinity breaks through the ice mass and enters the hidden city, ready to obtain the Divine Source. After climbing the facade of the sanctuary, Lara sees Ana with a group of mercenaries entering the building.

After her fight against Konstantin, Lara faces Ana in the Chamber of Souls, where Lara tries to talk Ana out of taking the Divine Source. When Jacob enters the room, Ana shoots him multiple times. The Undying Ones then advance on the women. Not intending to die, Ana opens the urn containing the Divine Source, but is overpowered by its power and drops to the ground. To end the damnation caused by the source, Lara picks it up and smashes it, thereby destroying the Undying Ones and ending Jacob's immortality. Ana however is seen living, slowly crawling off.

After the credits roll, a post credits scene start, happening just after Lara destroyed the Divine Source. Lara and a sickly weakened Ana walk through the snow in Northeastern Siberia. A weak Ana sits on a rock and coughs. Lara asks what did she mean when she said 'another Croft doesn't have to die for this.' Lara realizes she killed her father and so aims her gun at Ana. Ana tells her that Trinity ordered his execution but she couldn't do it. Lara dismisses it as a lie. Ana tells her that she loved him, but is shot by a hidden sniper before she can say more. The sniper then asks his boss on the radio if he should kill Lara as well, to which his boss replies that Lara is not to die yet. 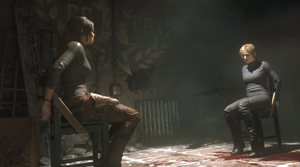 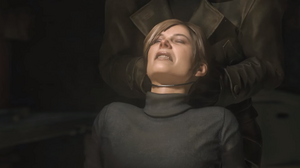 Ana is seemingly choked by Konstantin 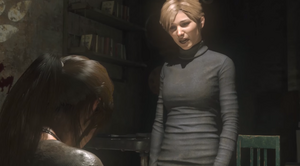 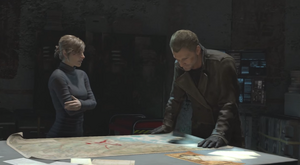 Ana and Konstantin watch a map of the mountains 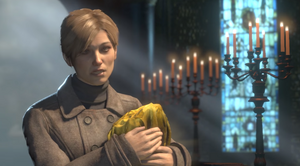 Ana with the urn containing the Divine Source 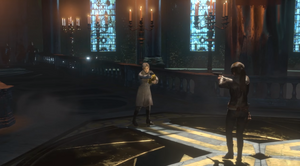 Ana and Lara face off at the Chamber of Souls 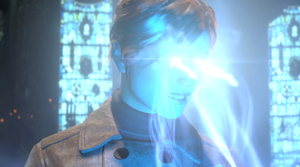 Ana is affected by the Divine Source 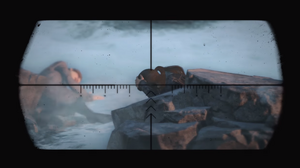 Retrieved from "https://villains.fandom.com/wiki/Ana_(Rise_of_the_Tomb_Raider)?oldid=4279417"
Community content is available under CC-BY-SA unless otherwise noted.