Member of the Circle of Nine

Anacrothe is one of the antagonists from Blood Omen: Legacy of Kain.

Anacrothe was the guardian of the Pillar of States. He had a high knowledge about chemicals and could change the states of matter at will. His experiences weren't always successful, as one of these left his face scarred. When he was corrupted by Nupraptor's attack at the Circle, he became insane and, along with Bane and DeJoule, they created the Dark Eden, from where they started a plot to twist the land.

With their combined powers, they created a massive energy that steamed from the apex of the structure, creating a dome around it that started spreading through the landscape, leaving behind only a bizarre and twisted parody. Anacrothe's powers turned the soil within the dome into hot lava. Kain, after meeting with the vampire Vorador, proceeded to the Dark Eden to kill the corrupted guardians. He finally meets the three guardians inside the place, but Anacrothe runs away and summons Malek to help them.

Much time later, when Kain travels to the Pillars of Nosgoth after killing Moebius, he finds Anacrothe arguing with Mortanius. Anacrothe thinks Mortanius betrayed the Circle when he ordered Kain's death and sent him to kill them. The two have a brief fight, but Mortanius easily overpowers Anacrothe, killing him by breaking his spine.

The Guardian of States they were charged with presiding over the shapes and forms of all physical matter.

Not much has been shown of what they can do, just two skills:

Lava generation: The guardian changing from earth (solid state) to liquid state, can turn the soil into lava.

Quiescent Transformation: This spell turns the Guardian into mist, making him invulnerable to attack. In this form he has a Dash Attack that if it hits will envelop you and hold you in place. Right before the dash hits, the Guardian will shift back into a solid form for a moment. By trapping the target in this "dash" mode, the guardian will slowly absorb his vital energy.

Shapeshift: The guardians in addition to transforming into mist, have the ability to change shape into wolf, bat and probably more, (the original symbol of the pillar of the mind, are the mentioned changes of form), this supports it, the ability Quiescent Transformation is nothing more than Kain's improved mist form. 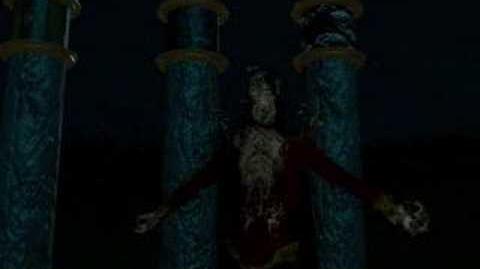 Retrieved from "https://villains.fandom.com/wiki/Anacrothe?oldid=3605656"
Community content is available under CC-BY-SA unless otherwise noted.