Advisor of the Tube Empire

Vast Knowledge
Magic
Access to the library of Tube

Earth Curiousities Beast Anagmas is a wise beast in service to the Underground Empire Tube who knows nearly everything and a major antagonist in Hikari Sentai Maskman. He is the only one allowed to access Tube's ancient library and read its sacred documents.

He was voiced by the late Takuzou Kamiyama.

Anagmas has served Tube and the Igam family for 300 years. After Emperor Zeba rose to power and overthrew the Igam family, Anagmas loyally served him as well as a part of his inner circle.

On the eve of the Tube Empire's invasion of the surface world, Anagmas gave a speech proclaiming Tube's superiority and praising Zeba as he made his introduction.

When the Tube Empire faced resistance from the Maskmen and both Prince Igam and Commander Baraba failed to defeat them, Anagmas was allowed by Zeba try his own hand at destroy the Maskmen. The first plan Anagmas hatched was to use magic and crystal balls to enhance the Earth Imperial Beast Igara Doggler, along with Igam and Baraba. While the three were able to overpower the Maskmen with Anagmas's magic, Anagmas's plan was foiled when Akira got close enough to him to break his crystal ball. Soon after, Anagmas concocted another plan that involved using Dokuro Doggler to tire out Momoko and prevent her from being able to join the Maskmen when they piloted Great Five Robo, preventing them from wielding its full power and giving the Tube an opportunity to destroy it.

When the Maskmen uncovered Zeba's identity, Anagmas attacked them to destroy the evidence and keep Zeba's true nature a secret. He was destroyed by Jet Cannon, but was enlarged by Okelampa to fight the Maskmen's Galaxy Robo, only to be destroyed again. 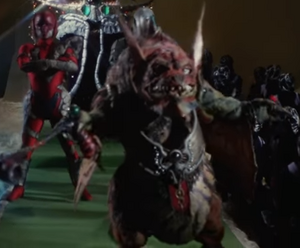 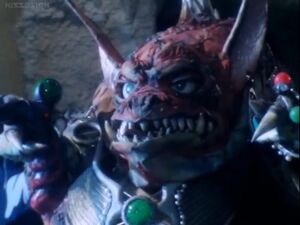