Voice of the People (self-proclaimed)

Leader of his anarchist gang

Save Gotham City by using bombs to eliminate its "corrupt" corporations and governments.

Work with Batman or kill him if he refuses (both failed).

He is an anarchist leader, terrorist and political activist in Gotham City who aimed to overthrow the city's governmental and corporation systems, viewing them as the sole reason for the city's long history of corruption and organized crime. His extreme methods, including illegal bombings and attempted mass murder, pit him against Batman.

He is voiced by Matthew Mercer, who later voiced Robin/Tim Drake in Arkham Knight.

At an unknown point, Anarky gave a call to Captain James Gordon in an attempt to convince him in leaving the GCPD while he still can as he does have a spotless record, he is still in his view "a cog in the machine." Gordon tried to track down Anarky by tracing the call but Anarky hung up before the trace could be completed. Anarky's group then was infiltrated by hobo informants to the police in exchange for meals and lighter prison sentences.

Anarky first contacts Batman when he leaves Penguin's Ship, The Final Offer. A projection of Anarky tells Batman that 3 Bombs have been planted around Gotham City and gave Batman the choice to defuse them or allow them to blow up. After speaking to an "Anarchist" located just above the projection, Batman manages to race through the city to the Gotham Bank in the Plaza where the Dark Knight was capable of successfully defeating Anarky's followers and defusing the first bomb.

A second Anarchist, located in the Diamond District, informs Batman the second bomb's location and Batman repeated his last method of defeating the guarding thugs and defusing the Bomb.

The third and final Bomb was located in the GCPD Building and the third Anarchist told Batman of it's location. One final time, Batman takes down the gang of Anarky's followers and defuses the Bomb, but this time Batman received instructions to confront Anarky at the Solomon Wayne Courthouse.

After taking out a gang of Anarchists outside the back entrance of the Courthouse, Batman then finally finds Anarky who suggests they should work together. Batman refuses the Anarchists attack and then Anarky uses an Electric Baton in an attempt to kill Batman in a fight. Batman managed to defeat Anarky and removed his mask, revealing he was just a teenager. Batman then restrains Anarky and leaves him for the GCPD to capture. Afterwards, his followers left 24 logos around the City.

Even after his capture, Anarky's followers continued to cause several riots in South Gotham and set up bombs on New Year's Eve. Batman managed to handle the riots and then defused an explosive. They then rigged the communications band to automatically activate the remaining explosives which Batman should disable their communication channel transmitting a soundbite of Anarky's creed. Afterwards, they then left 12 logos throughout Gotham.

For several years, no one knows what happened to Anarky, now identified as Lonnie Machin, when he was captured. According to Aaron Cash, he is presumably locked up someplace so secret that he would never be seen again since the government doesn't take a liking to anarchists. 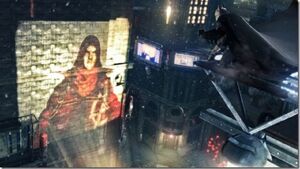 Promotional image of Anarky in the Arkham Origins demo. 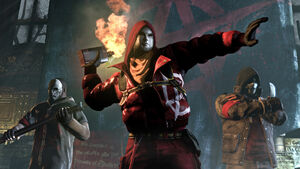 Anarky and his followers. 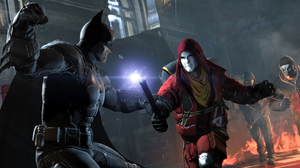 Anarky's fight with Batman in the church.

Anarky being unmasked and defeated. 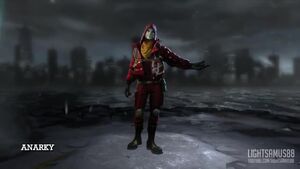 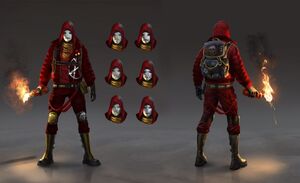 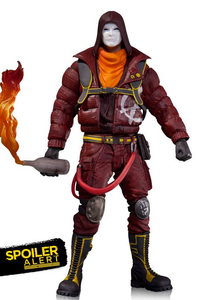 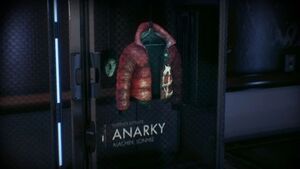 Anarky's jacket on display in the GCPD in Arkham Knight. 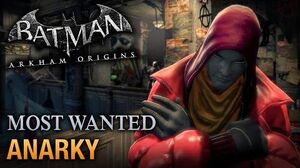 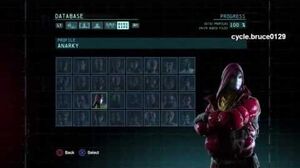 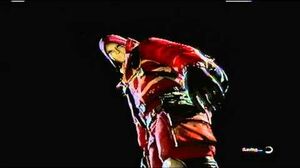