Humiliate and defeat Batman whilst proving himself Batman's superior.

Anarky is one of the main antagonists of the TV show Beware the Batman, and is more overtly villainous than his mainstream counterpart (who is only sometimes a villain and other times an anti-hero).

He is voiced by Wallace Langham, who also voiced two other Batman villains, Ocean Master in Batman: The Brave and the Bold and Clayface II in The Batman.

In "Tests", Anarky is amused by two teenage criminals who express themselves through destroying art. When they were captured by Batman, he freed them and gave them high tech weapons to continue, telling them that it was a donation. They used these until Batman came and defeated them again and they were sent to jail. Anarky frees them again and gives them even more powerful weapons. Batman uses his automatic bat-mobile to fight them while he goes after Anarky. They are evenly matched in a fight until Anarky reveals that he planted bombs on two mono rails and only gives him time to deactivate one. However, Batman is able to defuse them by using the wires and Anarky is able to escape.

He returns in the episode "Sacrifice" where he steals a box containing Ra's al Ghul from the League of Assassins. He tells Lady Shiva that if she wants it back she would have to get something from the Gotham Contagion Research Lab. He them commits an attack on the city, and when Batman and Katana that Shiva and her henchmen are there. When the two groups fight each other, Anarky then seals them in it and releases a virus that turns Shiva's goons into hulking monsters and Batman, Katana and Shiva have to work together to fight the monsters and get past all the security walls. Anarky plans to turn them into monsters as well then release the virus onto Gotham itself. In the end, they escape and the lab is burned down which kills the virus and Shiva's goons are cured. Anarky later sends an apology letter to Lady Shiva and sends her Ra's box back.

In "Nexus", he bombs the mayor of Gotham City's office with one of Batman's bombs so that the police would believe Batman is the culprit. Later, Batman kidnaps Harvey Dent to draw Anarky out. Anarky briefly fights Batman and Katana, however, he is able to plant bombs on Batman, Dent, Katana, and himself. Batman and Dent's are linked so if they get too far from each other they will explode, same with his and Katana's. Anarky orders Batman to take to in a park in the city and surrender to the police or he will detonate another bomb in the city. While they do this, Katana thinks he is bluffing and rides away on her bike to find out, while Anarky follows her in his truck. After eluding the police  Batman cracks the code on the bombs and places them all on Anarky. He quickly activates his last bombs before escaping through an manhole. However, no one is killed.

In "Monsters", he breaks into Dent's office and tries to convince him to join his cause.

In "Hero", after watching Batman and Katana stop Anarky again, Dent decides to work with Anarky in order to stop them. Anarky hires Deathstroke and tells Dent to make him part of Dent's Special Crimes Unit (SCU). He wants Deathstroke to not only out stage Batman but kill him to. This works at first, however, when Dent complains to Deathstroke and Anarky, Deathstroke reveals that he has different plans of his own. Anarky then tries to kill Deathstroke with a gun, but Deathstroke knocks him out and kidnaps Dent to lure out Batman. In the end, after Batman saves Dent and defeats Deathstroke, Anarky congratulates him on his victory before escaping. 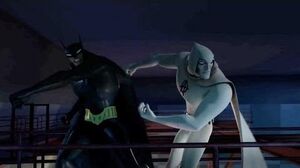 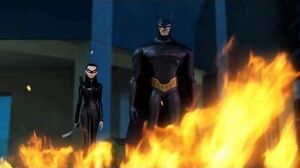 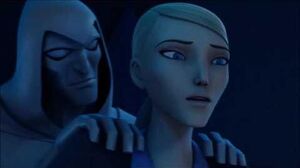 Retrieved from "https://villains.fandom.com/wiki/Anarky_(Beware_the_Batman)?oldid=4283334"
Community content is available under CC-BY-SA unless otherwise noted.