Commander of the Shushu army

Complete the task of his master Rushu to entering in The World of the Twelve and other dimensions to govern it.

Escapes of the train and returning in her dimension (succeeded).
Helps Qilby to kills Phaeris and find his Dofus to open the portal to Emrub (abandoned).
Killing Phaeris, Yugo, Adamai (and Qilby for betray) (failed).

Anathar is a major antagonist in the French animated TV series Wakfu. This monster is a senior Shushu with the power to copy the skills of anyone who touches him, commanding head of Rushu's Shushu armed forces. Originally it was one of 995 Shushu imprisoned in the objects, specifically the shadow hood, guarded by Justice Knight (member of the Clan of Cania Plains, Bonta area in the game) but under pressure from the Rubilax attack, Justice released Anathar then turned out to be too weak to keep him under control.

He is voiced by Antoine Tome in French and Joe Mills in English.

This fierce monster is fast, cruel and ruthless Anathar is a real colossus with enormous power, fists clashing adventurous plagues like Moskitos, and his abdominal muscles hide a voracious stomach that wraps around everything that crosses his path. But the musculature of this terrible Shushu is far from his only asset! When an adventurer is made, Anathar can absorb the essence of his powers to duplicate.

After being released from the Tofu Brotherhood, Remmington free Anathar to distract the heroes, realizing sooner that this was a bad idea. The peculiarity of Anathar is that, in addition to being able to absorb and use the powers of those who touch him, duplicates their power so that he can even open a portal for the Shukrute, the world of Rushu, and to create more of two simultaneously. Tristepan, Remington and Yugo managed to push him back into the Shunkrute but eventually imprisoned them. After a clash in the demon goddess where Anathar shows up all his cruelty, the heroes except Grany and Remington managed to escape.

Decides to release Remington to thank him for his help, but instead of being grateful to them, he attacks him and releases a monster to cover his escape. But his plan fails because the monster turns against him and swallows Grany (his brother turned into a cat). Then he takes on Tristepin to rob him of Rubliax because he seems to have an account to settle with him. The monster puts Rubilax with Grany in her stomach and runs away. During the assault, the Justice Knight father was expelled from Anathar. As Anathar is weakened, his belly opens and Remington tries to recover Grany while Tristepin tries to catch Rubilax. Seeing that Tristepin came to his rescue, Rubilax finally begs him to beg him to save him. Indeed, given what Rubilax did to King Rushu, he knows very well that if he returns to the world of the Shushus he will probably be put to death.

Anathar is too close to the portal to be able to free himself, he knows that he is condemned to return in the dimension of the shushus. To get his head high, he grabs Remington, Tristepin and Yugo and draws them with him in his dimension. Amalia, Ruel and Evangelyne see the dimensional portal close again without having succeeded in entering it. Now their friends are inaccessible, so they can not do anything to help them.

Unsuccessful Anathar attack, the group escapes from the Rushu arena and heads for the gate. Rubilax is so weak that he can no longer stand. Despite his weight, Tristepin decides to carry it on his back. Rubilax does not understand why Tristepin helps him, he advises him to abandon him because his presence slows the group and jeopardizes their chances of escape. Even if Rubilax is right, Tristepin refuses to abandon it. Rubilax finally sees what it means to have true friends watching over you and it seems that he is beginning to appreciate that.

Many shushu landed, quickly followed by Rushu, Qilby and Anathar who took possession of Adamaï's body. Yugo wondered how he could make his appearance normal to his brother. Far from the battle, Goultard believed dead felt the arrival of Rushu and he seems determined to go and see what happens. Yugo and the dragon Phaéris soon realized that the Anathar shushu had taken possession of Adamaï's body, but they had no idea how to save it. The Dragon Phaeris has great difficulty in standing up to the Shushu Anathar who merged with Adamai, so he inherited his power. Yugo can count only on himself to face Qilby. Unfortunately, he is still too young and, despite his unwavering will, he is quickly defeated. Seeing that Qilby was about to finish him, Phaeris intervened to protect him.

This attack has no effect against an opponent like Qilby who can teleport through his portals, but at least it has distracted Qilby's attention and allowed Yugo to recover a bit of his spirits. While Qilby gets rid of Anathar, Yugo emerges from the rubble.

Anathar is an large jackal-like creature with black fur, an yellow head, white pupiless eyes with an scar, an small nose, two antennas and sharp teeth, an black body, pincers-like abdomen, claws locked in an pair of handcuffs and an grasshopper-like feet, he normally wears an armor made of bones.

His appearance in the comic is minimal since he is not named or referenced by anyone. In the past days, when the Justice Knight Senior fulfilled his duty as a masked hero, he was equipped with his shushu Anathar, in the form of a cape, with which he could possibly merge with him after facing several supervillains.

In the page 176: in the third box, we can see that the buckle of the cape of the Knight Justice father contains the eye of Anathar, except this character was released (episode 8) then he was killed by Qilby in the episode 25, so it can no longer be part of the Justice Knight's cloak, so theoretically there should be an empty space instead of the eye.

Anathar does not have any important role or presence to be part of the game, but it is possible to win a package with gifts that includes a miniature pet that is shaped like Anathar.

Anathar appears as a character with which it can be used for the fight in the board game as in the online version, having its own card and figure.

Anathar will be present as a character that must be summoned on the board, having the ability to control the opponent who tries to attack him, as long as he is still alive. 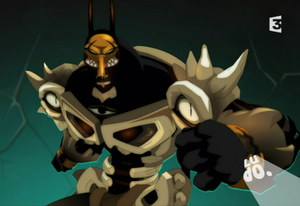 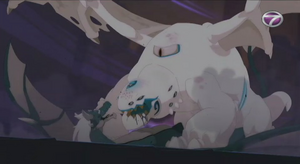 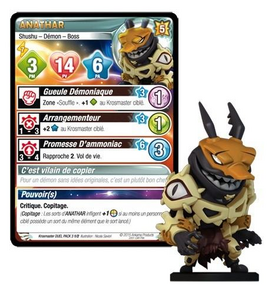 Anathar's card and figure in Krosmaster. 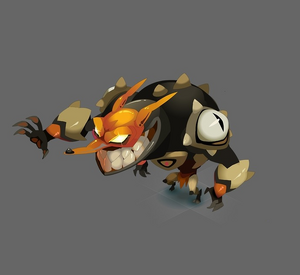