NOTE: This article is about the incarnation of KGBeast from the DC Extended Universe film series. The mainstream version can be found here: KGBeast.

Anatoli Knyazev is a major antagonist in the 2016 superhero movie Batman v Superman: Dawn of Justice. He is a vicious and cunning Russian arms dealer, a mercenary, and a gangster who's working as the henchman of Lex Luthor.

He was portrayed by Callan Mulvey, who also portrayed Milan in the TV Series Power, Rival Hunter in 2011 film The Hunter, and Jack Rollins in Captain America: The Winter Soldier and Avengers: Endgame.

Anatoli Knyazev is a Russian gangster and henchman of Lex Luthor. While investigating Knyazev, Batman finds out Luthor's involvement with Knyazev.

Knyazev was present in Nairomi during Lois Lane's interview with a warlord. He at first acted as the general's bodyguard during an interview with Lois Lane, exposing Lois' assistant Jimmy Olsen as a CIA spy. However, Knyazev and his mercenaries then killed the warlord's guards, resulting in a battle with many casualties. After killing all enemies, Knyazev and his men fled the base on motorcycles while the compound was destroyed in a drone strike. The casualties were later blamed on Superman, who had arrived to save Lois.

Near the end of the movie, Luthor has his henchmen kidnap Superman's mother Martha. Additionally, Knyazev kidnaps Lois Lane and brings her to LexCorp. Knyazev then flies off in his helicopter and heads to the warehouse Martha is kept in. To save Martha, Batman and Superman team up. Tracking Knyazev's mobile phone, Batman arrives at the warehouse, jumps out of the Batwing and defeats all of Knyazev's men, eventually arriving inside the room where Knyazev holds Martha. Knyazev tells Batman to drop the gun he took from one of Knyazev's men, claiming that he'd burn Martha with his flamethrower should Batman not comply. Stating that he believes Knyazev, Batman shoots the tank of Knyazev's flamethrower, resulting in an explosion that seemingly kills the Russian gangster. Batman shields Martha from the blast.

When Superman returns to Luthor, Luthor realizes that he hasn't killed Batman. He calls Knyazev to have him kill Martha, but Batman answers the phone, telling both Superman and Luthor that Martha is alive.

Anatoli Knyazev is a ruthlessly cruel man, completely obedient to the orders of his employer Lex Luthor, being more than willing to commit atrocities (such as to indirectly murder Cesar Santos, directly murder Kahina Ziri and many other Nairomians, as well as to burn Martha Kent alive) if ordered by the latter to do so. 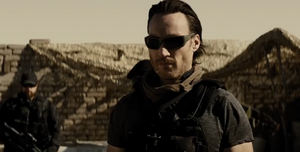 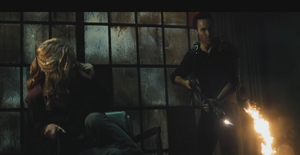 Knyazev's flamethrower about to explode 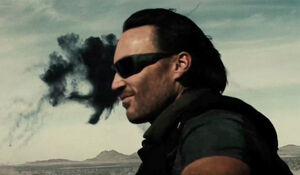 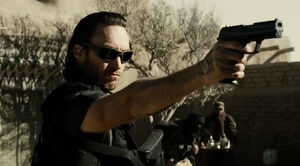 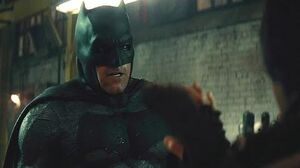 Retrieved from "https://villains.fandom.com/wiki/Anatoli_Knyazev_(DC_Extended_Universe)?oldid=4255244"
Community content is available under CC-BY-SA unless otherwise noted.