Member of the Inner Circle

Aiding Makarov in his plans.

Frame the USA for the Zakhaev Airport massacre (succeeded).

He was voiced by Daniel Gamburg.

Nothing is known about his past except he was a member of Vladimir Makarov's Inner Circle. Along with Makarov, Lev, Kiril, Viktor and undercover American agent Joseph Allen, Anatoly perpetrated the Zakhaev Airport massacre, although he was the getaway driver and did not participate in the murders.

Kiril, Lev, Makarov, Viktor and Allen entered the airport pretending to be Americans. Using USA-built weapons, they killed all the civilians in the airport. During the attack, Lev and Kiril were killed by Russian security forces and Makarov left with Allen and Viktor. Waiting in the ambulance they escaped in, Anatoly commented that they had sent a strong message with the attack, to which Makarov replied "That was no message" before shooting Allen, who he had realized was undercover and who he left behind for the Russians to find, Anatoly, Viktor and Makarov escapes, this was the last of what was seen of him and Anatoly is later never seen again for the rest of the trilogy.

The discovery of Allen's body, along with the attackers pretending to be American, led to the success of Makarov's plan to trick Russia into declaring war on America. Unlike Makarov and Viktor, its unknown if Anatoly survived the war or not, if he did he would be the only one of the attackers and sole survivor of the Inner Circle to get away with their crimes.

Anatoly's ultimate fate is left ambiguous after series it's unknown if he survived World War III or not. However it's possible that he was arrested for what he did since his actions and the Inner Circle's crimes are now exposed to the world.

Not much can be told about his personality, though he is shown to be loyal to Makarov and the Inner Circle, however in the massacre Anatoly is shown to be cowardly since he didn't want to kill anyone showing he has some standards. 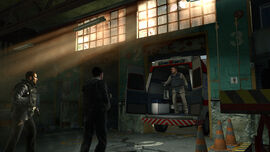