Enjoying luxuries bestowed by his position of power.

Anatoly Chedenko is the main antagonist of Command and Conquer: Red Alert 3. He was the Premier of an alternate Soviet Union, created by mass-manipulation of the time-stream, he is aware of such alterations and indeed was responsible for many such alterations so as to gain and keep power.

He was portrayed by Tim Curry, who also played Frank-N-Furter in The Rocky Horror Picture Show, the Lord of Darkness in Legend, Wadsworth in Clue, Pennywise in the It television miniseries, Thaddeus E. Klang in TaleSpin, Taurus Bulba in Darkwing Duck, Hexxus in FernGully: The Last Rainforest, the Evil Manta in The Little Mermaid television series, Cardinal Richeliu in The Three Musketeers, Farley Claymore in The Shadow, Kilokahn in Super Human Samurai Syber-Squad, Drake in The Pebble and the Penguin, Dr. Anton Sevarius in Gargoyles, Long John Silver in Muppets Treasure Island, Simon Doonan in the Titanic TV movie, Maestro Forte in Beauty and the Beast: The Enchanted Christmas, Slagar the Cruel in Redwall, Dr. Slicer in Recess, Ben Ravencroft in Scooby-Doo and the Witch's Ghost, Big Brother in Johnny Bravo, the Mouse King in Barbie in the Nutcracker, Professor Calamitous in The Adventures of Jimmy Neutron: Boy Genius, Scarlet Fever and Nick O' Teen in Ozzy & Drix, Dale "The Whale" Biederbeck in Monk, Belial in The Legend of Atlantis, El Maléfico in ¡Mucha Luca!: The Return of El Maléfico, Von Talon in Valiant, Philippe in Barbie and The Three Musketeers, Billy Flynn in Criminal Minds and Emperor Palpatine in Star Wars: The Clone Wars.

Antatoly began life as a colonel in an alternate time-line but would change history so as to ultimately gain power over the Soviet Union, radically changing the empire in the process - having killed off nuclear weaponry but opened up a new age of unparalleled technological warfare with a massive three-way battle between the Soviets, the Allies and the Japanese Empire.

Introducing himself to the player he is an apparently friendly if intimidating figure who sees potential in the player and defends them against attacks from General Krukov, who sees the player as unfit for their purpose - it becomes clear that Chedenko and Krukov have a mutual hatred for one another yet are forced to work together for the empire, though Chedenko does mention to the player that some day Krukov may push his luck too far.

Ultimately, an attack is made upon Chedenko's base and he evades death but is infuriated, decreeing that Krukov was a traitor he has the player kill him as vengeance and promotes them to a commander for their loyalty (it is later revealed this was a hoax and Krukov was innocent, with Chedenko faking the attack to justify Krukov's death). He then begins to show his thirst for complete conquest as he has the player head to Japan and topple the Emperor.

Following this the player is sent to Easter Island to speak with the Allies, who seek peace, Chedenko instead plans a brutal ambush to destroy the Allies once and for all, yet midway through the ambush he turns on the player, deciding they have outlived their usefulness and have grown too powerful. He then tries to kill them and goes completely mad with power, declaring that this was "his" time-line, betraying his true nature.

Eventually the mad dictator is defeated and the player becomes the new Premier of a Soviet Union that has effectively conquered the world, and Chedenko is reported to have died in the conflict (though in reality he had fled into outer space).

Chedenko is a masterful sociopath who cares only for personal power and will go to any lengths to achieve such goals, even faking an attempt on his life in order to frame Krukov and thus order his death. Likewise, he was quick to try and kill the player despite having been a close ally simply because he felt they were amassing just enough power and knowledge to be a threat to his own supreme authority.

Cherdenko had access to advanced technology including time-travel, which allowed him to effectively alter reality itself and put himself in supreme command over a heavily-altered Soviet Union, killing Einstein and Stalin, as well as numerous other leaders so as to change the time-line and allow himself to amass immense power.

Cherdenko had access to many super-weapons and ultra-technology, most of which powered on tesla-technologies (such as the Tesla Tank) but others had advanced features such as orbital-weapons and even an experimental weapon known as a Vacuum Imploder which he planned to use on his ex-ally on Easter Island, where he also had a massive fortress atop an active volcano (it was also shown he had went as far as weaponizing the stone heads of Easter Island themselves).

Despite his immense power, he was unable to stand completely unopposed and thus relied on his cunning and manipulation to have others do the dirty work of eliminating political and military rivals, only to betray these allies later on to ensure his own supremacy. 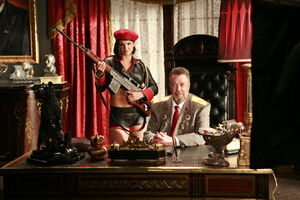 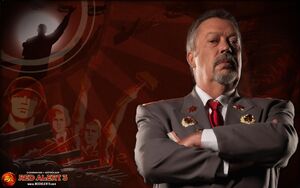 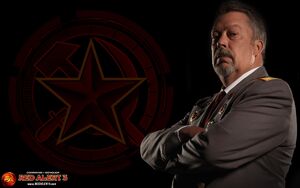