Greatest of All Dragons

Win the War of Wrath for Morgoth (failed).

Cataclysmic Dragon
Ancalagon, also known as Ancalagon the Black, is a minor antagonist in J.R.R. Tolkien's Middle-earth legendarium, appearing in The Silmarillion.

He was the most powerful and infamous of all dragons bred by Morgoth during the First Age of Middle-earth. He is the largest Dragon to have ever lived and the greatest of all winged Dragons. The fire he breathed was hotter than most other dragons.

Morgoth bred Ancalagon sometime in the late First Age. Ancalagon was intended to be the Angband's last defense of an invasion: he would crush the enemy and obliterate them. Morgoth made Ancalagon far more powerful than even Glaurung, his ancestor. Unlike other Dragons, Ancalagon could fly. He was the first of his kind to do so.

He burst out of Tharangorodrim volcano during the War of Wrath and terrified the Host of the Valar, making them retreat and consider ending the war, because of the immense casualties caused by Ancalagon's devastating fire. Just when it looked hopeless, Eärendil the Mariner and Thorondor the Eagle with his flock arrived, and they battled Ancalagon and the other Dragons.

Soon, almost all Dragons were defeated, and Eärendil fought Ancalagon throughout the night. As dawn broke, Eärendil got the upper hand, and killed Ancalagon, hurling him out of the sky.

The Sun came up upon his death, as Ancalagon smashed onto Tharangorodrim, destroying it. Ancalagon's death ensured that the Host of the Valar would be victorious.

In The Lord of the Rings, Gandalf said that Ancalagon was probably the only Dragon, and the only being, capable of destroying a Ring of Power, except the One Ring. 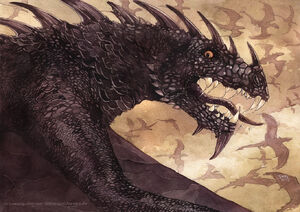 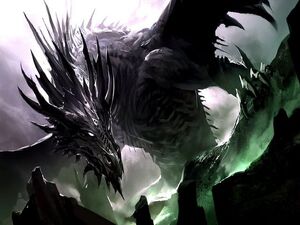 Anacalgon towering over the mountains. 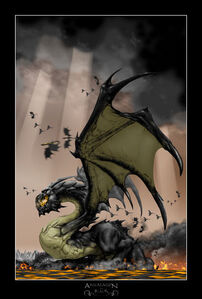 Ancalagon with the other dragons. 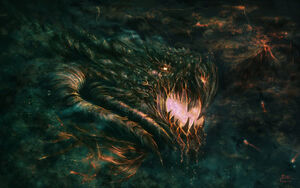 Acalagon the Black in clouds. 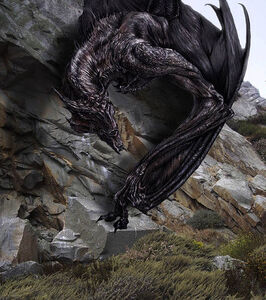 An inaccurate size depiction of Ancalagon. 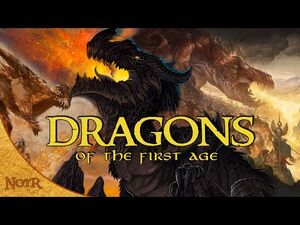 Glaurung, Ancalagon, & the Dragons of The Silmarillion - Tolkien Explained