Have the Dragonborn investigate the presence of a member from the Psijic Order (succeeded).

Defeat Savos Aren and Mirabelle Ervine (succeeded).
Harness the power of the Eye of Magnus (failed).
Defeat the Dragonborn (failed).
Destroy the College of Winterhold (failed).

Ancano is an antagonist from The Elder Scrolls V: Skyrim, where he serves as the main antagonist of College of Winterhold questline. Ancano is a Thalmor operative stationed in College of Winterhold where he acts as the advisor to the Arch-Mage Savos Aren. While the others in the College are highly suspicious of his actions, he, in turn, shows suspicion towards the Dragonborn when they first join the College. He also blames their presence in the College to the incompetence of the Arch-Mage. However, one of the College members by the name of Nirya admits that she finds him handsome. She does, however, believe that Ancano is up to something bad, and tells the Dragonborn that he is not to be trusted.

He was voiced by Alexander Brandon.

When the College arranges an expedition to the Nordic Ruins of Saarthal, the Dragonborn finds a strange artifact, which turns out to be The Eye of Magnus. The Dragonborn then recovers and reads a book called "Night of Tears", which describes a massacre in Saarthal involving both Nords and Elves fighting over a powerful magical artifact. After a while, the Dragonborn is contacted by the Psijic Order and they warn them about the power of this artifact and must not fall into wrong hands. They're then directed to the Augur of Dunlain, who warns the Dragonborn that Ancano wanted to get information from him about the Eye for different reasons. He will then direct them to find the Staff of Magnus. The Dragonborn then speaks to Mirabelle Ervine, who tells the Dragonborn to investigate the Dwemer Ruins of Mzulft, where a member from the Synod reveals a possible location where the Staff should be.

When the Dragonborn returns from the search for the Staff, they find out that Ancano has taken control of the Eye and is terrorizing the College, and the city of Winterhold as well. In the process, he ends up killing Savos Aren, the Arch-Mage, in a massive energetic explosion. The Dragonborn is then forced to defend Winterhold from a group of magic anomalies. After defeating them, the Dragonborn is then forced to find the Staff which is located in the Nordic Ruins of Labyrinthian. After the Dragonborn returns with the Staff, they use it on the Eye to break through Ancano's magic and then kill him in the process, ending his magic spree for good. Afterward, the Dragonborn gets promoted to Arch-Mage, and Tolfdir becomes the new Master Wizard. 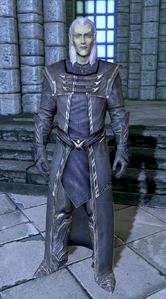