Ability to shoot lava from the volcano on his back

Serving Tactimon as his comrade

AncientVolcanomon is one of the antagonists and the third villain in the anime Digimon Fusion.

AncientVolcanomon is a Mega Class Digimon that resembles a volcano with arms, muscles, feet, and a head. Whenever he gets angry, the volcano on his back erupts and his face turns red. He can be cooled down by Frigimon.

AncientVolcanomon first appeared guarding the Magma Zone. After Shoutmon X3 beated SkullMeramon, AncientVolcanomon arrived on the scene. Mikey had no choice but to give him his Fusion Loader (which was a phony one) in order to stop him from blowing his top. Realizing he was tricked, AncientVolcanomon confronts the Fusion Fighters and attacked them. During the battle Shoutmon X4 got an idea and plugged AncientVolcanomon's top with a cork, causing him to overfill and apparently destroying him. 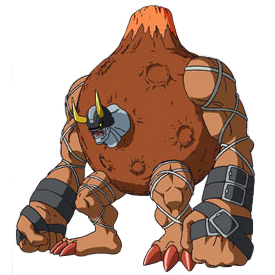