Consuming lifeforms either by itself or via its phantom drones.

Rule as a God.

The Ancient Enemy is the main villain of the Dean Koontz novel Phantoms, later adapted into the 1998 horror film of the same name. It is an amoeboid shapeshifting monster that lives underneath the fictional American town of Snowfield (located in California both in the novel and Colorado in the movie).

Similar to Pennywise the Clown/IT from Stephen King's IT, the Ancient Enemy can transform into nearly anything and makes its home in the sewers.

It is similar to a large amoeba and can send "phantoms" of itself to hunt prey, absorbing the knowledge and memories of the people and animals that are consumed. It believes itself to be Satan and is speculated to have caused the extinction of the dinosaurs and mass vanishings throughout history.

The Ancient Enemy's cells are similar to fossil fuel, which enables the protagonists to defeat it via oil-eating bacteria.

About the Ancient Enemy

The Ancient Enemy's main body is an enormous amoeba-like creature as large as the entire town of Snowfield. Despite its amoeboid appearance, it is actually a multicellular organism. Most of its mass consists of oily, non-cellular organic matter that can be controlled and manipulated by the Ancient Enemy's cells. When not mimicking something else, its tissue is a mixture of gray and maroon in color.

The creature's supernatural powers and form(s) greatly resembles famed movie director John Carpenter's version of the "Thing" from the classic science-fiction horror novel The Thing by Alan Dean Foster, the movie monster The Blob from the 1958 classic titular sci-fi/horror film The Blob, The Slime in the 1958 short story "Slime" by the late Joseph Payne Brennan, the nightmarish preternatural fiend IT from the 1986 unforgettable coming-of-age horror novel of the same name by the famous author Stephen King, and both the grotesque Shoggoths and the twisted deity Nyarlathotep of the Outer Gods envisioned in the works of the late legendary story writer H.P. Lovecraft. Its shape-shifting and probing abilities also resemble those of the planetary creature in the 1961 Stanislaw Lem novel Solaris.

The Snowfield survivors discover that the creature consumes other life forms as sustenance, and is able to perfectly mimic any creature it consumes. It can create small "Probes" or "Phantoms", imitating consumed life forms, to go forth and hunt more prey, obeying the orders of its "hive mind", which is referred to as the "Mother Mass". In addition, the creature absorbs the mental capacity and memories of those it consumes, so its mind grows more powerful, intelligent and self-aware over time. In fact, the creature initiates contact with the survivors and personally requests English academic Dr. Timothy Flyte to come to Snowfield, referring to him as its "biographer". Besides being able to mimic real animals and people, the creature can also form phantoms based on mental images from its victims; it takes sadistic delight in creating phantoms in the shape of religious demons and imaginary monsters to terrorize its victims before killing. The creature also apparently emits subtle psychic vibrations that its prey can sense. It is unknown if this is part of its biology or just another way of tormenting its victims.

The shape-shifting Ancient Enemy can contort its body into the smallest of spaces (through keyholes, air ducts, etc.), which is how it managed to kill and eat people who locked themselves inside rooms and cars. It also possesses extremely keen sensory organs and extremely fast speed, which explains why even the animals around Snowfield did not escape its predation. Conventional weapons and firearms cause no damage to its gelatinous body. It feeds by completely enveloping its victims (hence the universal bruising seen earlier) and then secreting a digestive enzyme, thus leaving no biotic traces of its victims. Toward the end of the novel the monster declares that it considers all other life forms, including humans, to be intellectually "inferior" to itself, nothing more than cattle to be consumed when it is hungry. It keeps Dr. Flyte and a few others, surgeon general Dr. Jennifer "Jenny" Page and her sister Lisa, and former FBI agent turned local sheriff Bryce Hammond, alive as "pets" for its own amusement.

The creature discloses to Doctor Flyte who theorized the existence of the Ancient Enemy, an entity he generalizes as "chaos in the flesh", and the other survivors, that it has come to ultimately think of itself as as a god and even The Devil, due to thoughts acquired from the minds of past humans it consumed (notably a devil worshipper). The absorption of these thoughts changed the creature over time from merely predatory to overtly sadistic; it engages in a number of intentional and non-predatory evils, including torture, psychological warfare, blasphemy, profanity, bigotry, attempted rape, and overall cruelty.

Ultimately, the Ancient Enemy's arrogance and human-derived ego prove to be its downfall. It "donates" a sample of its own tissue to the survivors and allows them to study it, confident that nothing they discover can be used against it. The characters not only discover what they need to kill the creature, but they also play its own ego against it to stall for time. The survivors use this time to acquire the weapons they need. In the end, the Ancient Enemy, after being infected by a broken last vial of bio-engineered bacteria in it's grasp while in the form of the boy named Michael Lindsay who was holding a toy gun while he was accidentally killed during Sheriff Hammond in an FBI drug raid, dies feeling the same fear and despair its victims experienced.

It is implied in the story that there may be more of these creatures that are part of the same entity (with the deceased Deputy Stuart "Stu" Wargle being one of them), scattered throughout the world. 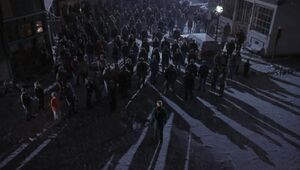 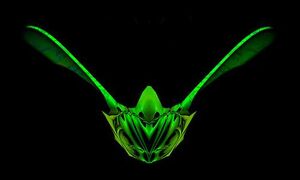 One of the Ancient Enemy's many forms.
Add a photo to this gallery

Retrieved from "https://villains.fandom.com/wiki/Ancient_Enemy?oldid=4156594"
Community content is available under CC-BY-SA unless otherwise noted.