Possessing and killing his vessels.

Get Washington's Bible for Moloch.

Ancitif is a demonic possessor in the TV show Sleepy Hollow and a major antagonist in its first season. The character is based on the infamous event, the Louviers possessions. 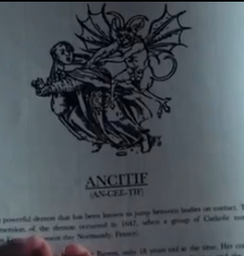 The possessions at Louviers (Normandy, France), similar to those in Aix-en-Provence, occurred at the Louviers Convent in 1647. As with both the Aix case and its later counterpart in Loudun, the conviction of the priests involved hinged on the confessions of possessed demoniacs.

Sister Madeleine Bavent was 18 years old in 1625. The initial possession victim, she claimed to have been bewitched by Mathurin Picard, the nunnery's director, and Father Thomas Boulle, the vicar of Louviers. Her confession to authorities claimed that the two men had abducted her and taken her to a witches' sabbat. There, she was married to the Devil, whom she called "Dagon", and committed sexual acts with him on the altar. Two men were allegedly crucified and disemboweled as these acts took place.

Madeleine's confession prompted the investigation, which found that other nuns were also victims of Picard and Boulle; they also reported having been brought to secret sabbats where sexual intercourse with demons, particularly Dagon, took place. These confessions were accompanied by what investigators believed were classic signs of demonic possession: contortions, unnatural body movements, speaking in tongues (glossolalia), obscene insults, blasphemies, and the appearance of unexplainable wounds that vanished without aid.

Beyond mere symptoms of possession, the body of Sister Barbara of St. Michael was said to be possessed by a specific demon named Ancitif.

As in the Loudun possessions a decade prior, the exorcisms at Louviers were a public spectacle. Nearly every person present at the exorcisms was questioned by the inquisitors, and the entire town of Louviers began exhibiting symptoms of hysteria as the cries of the nuns undergoing exorcism rose with the screams of Father Boulle, who was tortured at the same time; Mathurin Picard had died previous to the public display.

Father Bosroger recorded the proceedings, which he would publish in 1652. In his account, nuns were said to confess further evidence against Picard and Boulle. In addition to tempting them into sexual acts, Satan (supposedly in the form of Picard and Boulle) had also tried leading the nuns down the road of heresy. Appearing to the nuns as a beautiful angel, the Devil engaged them in theological conversations so clever that they began to doubt their own teachings. When told that this was not the same information they had been taught, Satan replied that he was a messenger of heaven who was sent to reveal fatal errors in what was otherwise accepted dogma.

Signs of possession continued throughout the exorcisms. One witness wrote that a nun "ran with movements so abrupt that it was difficult to stop her. One of the clerics present, having caught her by the arm, was surprised to find that it did not prevent the rest of her body from turning over and over as if the arm were fixed to the shoulder merely by a spring."

As the frenzy began to accumulate, a trial started. Father Boulle was burn alive and Sister Bavent got life-sentence. The corpse of Mathurin Picard was exhumed and burned.

After the nuns at Louviers were afflicted, authorities undertook the task of cataloguing the symptoms of demonic possession. The treatise they developed included fifteen indications of true possession:

It is widely believed today that the Louviers Possessions, similar in many ways to those at Aix-en-Provence (1611), Lille (1613), and Loudun (1634) were part of a political and religious "show" in France.

They also differ from later cases of possession and witch-hunt hysteria like that in England and Colonial America in that they involve lurid sex themes. During the exorcisms at Louviers, nuns were seen to raise their habits and beg for sexual attention, use vulgar language, and make lascivious movements. In the earlier case at Loudun, a local doctor named Claude Quillet wrote, "These poor little devils of nuns, seeing themselves shut up within four walls, become madly in love, fall into a melancholic delirium, worked upon by the desires of the flesh, and in truth, what they need to be perfectly cured is a remedy of the flesh.”

Most demonic possessions in France of this period (from the early to late 17th century) were of young women and appeared most often in the convents. Physicians and psychologists today attribute much of the activities to sexual hysteria, alluded to so long ago by Quillet.

Extreme seizures explained in the 17th century are today believed to point to epilepsy and similar diseases. In the time-frame of the cases in France, demonic possession served as a catchall explanation for any personality anomaly.

Ancitif was a demon based on the real historical event as well as urban legends of Louviers possessions, being amongst the demons that possessed nuns at the Louviers Convent in 1647, as well as the possessor of Sister Barbara of St. Michael. In this series' description, Ancitif was a minion of Moloch (the series' main antagonist and the master the Four Horsemen). He had the ability to jump from body to body and possess its victims via physical contact, but had a weakness against salt, and was originally casted back to Hell by a specifically made French lantern.

However, some centuries later, Ancitif had returned under Moloch's order and possessed Jenny Mills, the younger sister of Abbie. Both of the sisters had witnessed Moloch's presence when they were younger. Having no one to believe her, Jenny was put into a mental ward whilst Abbie chose to remain silent and said she didn't see anything.

After Jenny was possessed by Ancitif, she was recovered by Sheriff August Corbin, the only person who chose to believe her and support her at the time, and tied her on a chair for exorcism. During the exorcism, Ancitif threatened Corbin by saying he would and must kill Abbie, before prophecizing about Corbin's fate: "You will die. You will die, August Corbin, by the hands of the Horseman of Death." Shortly afterwards, Ancitif attacked Corbin, but was halted thanks to the circle of salt around him, before Corbin exorcised him from Jenny.

Throughout the following years, even after being saved by Corbin, Jenny had been fighting against Ancitif's influence within her head, as he goaded her to kill Abbie. She eventually returned back to the insititution to protect Abbie, only to escape years later after discovering Corbin's death as well as the Horseman's return.

Failing to possess Jenny fully, Ancitif eventually remained at large and had been silent for several years. Nevertheless, under Moloch's order, Ancitif resurfaced and threatened Captain Frank Irving to give in George Washtington's Bible that Irving kept, first through possessing a vendor and later a deputy officer, neither of them having any memories of threatening Irving after Ancitif left their bodies. If Irving disobeyed, Ancitif would kill Irving's daughter, Macey.

While possessing the elderly woman, Ancitif manages to get into the police department and transports himself on a duty police officer. He threatenes Frank Irving's daughter, Macey, saying that he will kill the girl unless Frank gives him Washington's Bible. When Irving finds the officer, Ancitif possesses Devon Jones and left for the hiding place.

As soon as Devon under possession arrived at the hiding place, Ancitif immediatly possessed Luke Morales. He saw Reverend Boland spread a line salt in front of the front door for preventing the evil spirit come in. Unable to get into the door because of the salt, Ancitif forced Devon to brush off the salt. Thinking the man in front of him as Luke, Devon obeyed. Then, however, Ancitif smiled and snapped Devon's neck, killing him. He threw the corpse away and calmly got into the door.

When Irving didn't give him the Bible, Ancitif possessed Macey and knocked Luke to comatose. He left Luke to die and then killed Reverend Boland. Soon afterwards, he forced Irving to give him the Bible or he will bring his whole family to their demise. After learning Crane and Mills sisters stole the Bible, Ancitif was angry and mocked Irving for causing her daughter's disable. He did not realized that Macey had a strong will, though. Encouraged by Irving, Macey herself began to speak, but Ancitif soon took back his control on Macey and nearly strangled Cynthia. That soon failed, and he was sent back to Hell by Crane, Abbie, and Jenny Mills by using a lantern that lures evil spirits from possessed people that was given to Benjamin Franklin by French people while he was visiting France.

Much later, to spare his daughter and Luke from any incrimination, Irving tried to persuade the authority that a demon was behind everything. Sadly, the authority decided to place Macey under arrest for murdering the priest and Devon Jones, since for general public it was much more believable than demonic possession. To save his daughter, Irving eventually decided to take the fall for this, resigned from his post and placed himself under the arrest in exchange for his daughter's freedom.

Ancitif, much like Satan, can possess the bodies of mortal beings. Unlike Satan, Ancitif can jump from body to body and does so by touch, leaving people completely unaware of where they are, and what they said and did under his influence. Ancitif is another demon who serves Moloch and acts as his messenger delivering warnings and threats to his enemies such as telling Sheriff August Corbin his fate to die at the hands of Death as well as saying that Jenny Mills is destined to kill her sister Abbie.

When possessing a peson, Ancitif is able to use several mystical powers in them, such as flight, telekinesis and superhuman strength.

Despite its great powers, Ancitif does possess several weaknesses. Salt is a major one as it can not cross a line of salt, allowing it to be imprisoned. Holy water is another weakness as it cause the demon great pain and can temporarily stop it. However, Ancitifi's main weakness is that it can be exoricised from its host using a special lantern.