Concubine and later royal consort to Pharaoh Seti I (formerly)

Kissing Imhotep and planning dark schemes with him.

Be resurrected by Imhotep following her suicide (succeeded).

Enslave humanity with him as his eternal lover (failed).

She was portrayed by Patricia Velásquez, who also played Patricia Alvarez in The Curse of La Llorona.

Anck-Su-Nanum was once betrothed to the Egyptian king Pharaoh Seti I, but secretly carried out an affair with his high priest, Imhotep. When the pharaoh found out, they both kill him. When the pharaoh's bodyguards approached, she told Imhotep to run while she committed suicide, knowing only that he can resurrect her. Imhotep attempted this, going as far as stealing the book of the dead, and nearly succeeded in returning Anck-Su-Nanum's soul to her body, but was stopped before the ritual was complete, and her soul returned to the afterlife.

When Imhotep is revived and regains his power, he sets about reviving Anck-Su-Namun again. He abducts Evelyn Carnahan with the intention of using her as a sacrifice. The ritual is interrupted by the arrival of Rick O'Connell and Evelyn's brother Johnathan. Anck-Su-Namun is revived, but since Evelyn wasn't sacrificed yet, she revived albeit in reanimated corpse state. Anck-Su-Namun is then killed in the ensuing battle by undead soldiers commanded by Jonathan.

Ten years later, Anck-Su-Namun is revealed to have reincarnated as a beautiful and cunning thief named Meela Nais. She cons several graverobbers into joining an Egyptian cult that worships Imhotep alongside her who both run the cult together, and helping her exhume Imhotep and resurrecting him. When Evelyn is kidnapped, not for a sacrifice, but purely so that Imhotep can watch her die, Rick (now Evelyn's husband) arrives to save her. In the ensuing chaos, Rick and Evelyn's son Alex is kidnapped, as he hold the location to Ahm Shere and the temple of the Scorpion King in a bracelet on his wrist. Anck-Su-Namun is momentarily restored to her full ancient Egyptian self by Imhotep and she gleefully celebrates Alex's kidnap by kissing Imhotep passionately.

To restore Imhotep to his full glory, Anck-Su-Namun tricks her accomplices into opening the cursed chest that would allow him to drain their life forces.

In one flashback, it is revealed that Evelyn is the reincarnation of Nefertiti, the daughter of the same pharaoh to whom Anck-Su-Namun was betrothed and murdered. The two were sparring partners and rivals, their hostility carrying over to their present selves.

Anck-Su-Namun and Imhotep venture throughout Egypt with Alex in tow, determined to find the Scorpion King and gain control of his immortal army. They very nearly succeeded, but are thwarted by Rick and his friends. When the temple of the Scorpion King begins to be sucked into Hell, both Rick and Imhotep are caught hanging from a precipice overlooking the inferno with debris crashing down around them. Rick tells his wife to run, yet she rushes to his aid. In contrast, Imhotep begs Anck-Su-Namun to save him, yet she flees, leaving him broken-hearted and resigned to the pits of the Underworld. As the O'Connel's make their escape, Anck-Su-Namun gets lost in the Pyramid. With the temple collapsing around her, she tries to escape down one of the passageways but it collapses in front of her.

Turning to find an alternate way out, she instead finds herself teetering on the edge of a channel in the Temple structure filled to the brim with scorpions. Anck-Su-Namun tried desperately to retain her balance, but the tremors from the temple caused her to ultimately lose her balance and, screaming, she plunged head-first into the mass of arachnids. The scorpions instantly swarmed her, submerging her beneath them. A flailing Anck-Su-Namun managed to break through the sea of scorpions momentarily, reaching desperately for the ledge as the scorpions clambered over her body and forced their way down her throat (presumably stinging her as well). She was quickly submerged again, her cries growing fainter all the while until only her left hand was left sticking limply in the air. Anck-Su-Namun's remains were subsequently destroyed when the temple was submerged beneath the desert sands, her death mimicking Beni's death scene from the previous film.

Anck-Su-Namun is a cowardly and manipulative woman who only cared about her beauty. She could never do anything by herself and relied on constant protection. Even though she does have feelings for Imhotep, that didn't stop her from leaving him to die in the Underworld simply to save herself.

She contrasted Nefertiti in personality, as while Rick told Evylen to leave the pyramid without stopping to rescue him, Evylen decided to rescue Rick anyway, allowing them both to escape.

Anck-Su-Namun appears as one of the major antagonists in the cartoon show The Mummy: The Animated Series.

Anck-Su-Namun also appeared as one of the major antagonists alongside Meela Nais (her reincarnation) in the video game The Mummy Returns. 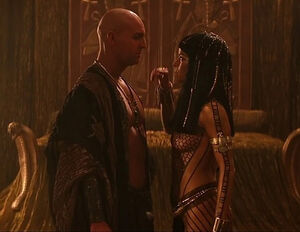 The full and passionate kiss of Anck-Su-Namun and Imhotep. 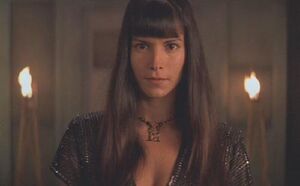 Anck-Su-Namun being devoured by a horde of carnivorous scorpions. 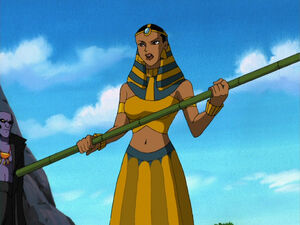 Anck-Su-Namun as seen in The Mummy: The Animated Series.