Andariel, the Maiden of Anguish

Andariel is both a villain and boss in Diablo 2 she is also one of the Lesser Evils of Diablo lore, who was believed to be close to Diablo prior to her death, she was known by the title of Maiden of Anguish and had an affinity for causing emotional distress: despite being from Hell Andariel had a strong aversion to fire.

Andariel is the only Great Evil with a feminine appearance, though it is grotesque with three-joint legs and four appendages similar to scorpion tals extending from her back. Her long red hair is also always seen as standing up rather than falling down.

As with all the Great Evils, Andariel was spawned from one of the seven heads of Tathamet. She controlled the Realm of Anguish in Hell. She was considered to be a close confidante of Diablo.

The Lesser Evils came to be discontent with the Prime Evils' focus on Humanity after the events of the Sin War, furious that the Great Conflict had been apparently abandoned. Led by Azmodan and Belial, the Lesser Evils enacted a stratagem to overthrow the Three. Andariel and Duriel had their doubts at first, afraid that they would fall in the coming conflict. Belial however, kept them in the fold. The plan worked, and Andariel reveled in Diablo's misery, enjoying a state of unmatched bliss through the humiliation of her former ally. However, the pact that the Lesser Evils had made soon fell apart, as Azmodan and Belial warred for the position of supreme ruler of Hell. She aided the Evils for many years, but eventually lost faith in their plots.

Nearly three hundred years after the Dark Exile, Diablo escaped from his captivity beneath the Tristram Cathedral, heading east to reunite with Mephisto and Baal. Andariel and Duriel concluded that the Primes would inevitably reclaim their position in Hell. Therefore, they endeavored to gain favor with the Lord of Terror by protecting his human host. Andariel was thus sent by Diablo to invade the citadel of the Sisterhood of the Sightless Eye in order to close the passage through the mountains into the eastern lands of Aranoch. During the assault on the Rogue Monastery many sisters were slain and others were turned to serve Andariel herself. By the time Diablo arrived and passed through the Eastgate, Andariel's position of power was well solidified.

Andariel's reign did not last long however, as a group of heroes pursuing Diablo stormed the monastery, coming to face her in the catacombs. She not only struck out at her foes physically, but battered them emotionally as well, stirring within each of them memories of loss, sadness, betray and regret, feeding on their anger and relishing in their despair. Despite the heavy toll on the minds of those she attacked however, the heroes succeeded in dispatching her.

Andariel's spirit ended up in the Black Soulstone. Over 20 years after her defeat, she would become merged with Diablo, now the sole Prime Evil. After Diablo's defeat, all the lords of Hell were returned to the Black Soulstone, their Souls screaming for release. The Stone was destroyed by Malthael in an effort to defeat the Nephalem, but he was defeated, and Diablo freed, still containing the essence of Andariel and the other Evils. 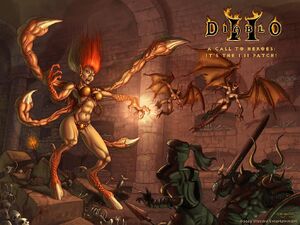 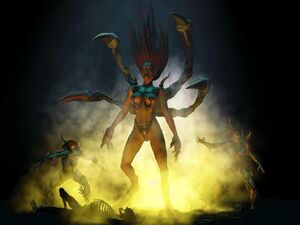 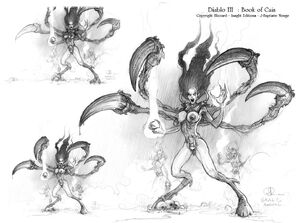 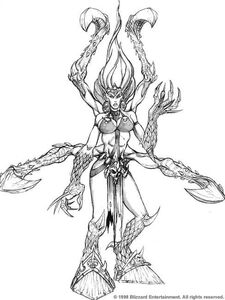 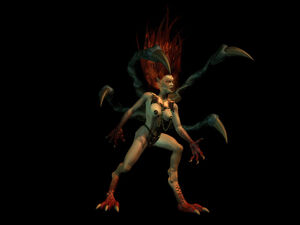 Retrieved from "https://villains.fandom.com/wiki/Andariel?oldid=3148423"
Community content is available under CC-BY-SA unless otherwise noted.