A Winter amid the Ice

Convince Jean Cornbutte to return home and abandon Louis and his crew to death.

Be with Marie and marry her.
Kill Louis Cornbutte and his crew, then return Dunkirk (all failed).

André Vasling is the main antagonist of the 1855 short-story A Winter amid the Ice (French: Un hivernage dans les glaces) by Jules Verne. He is the arch-rival of Marie's fiancé Louis Cornbutte.

André Vasling was Dutch by birth, but came from no one knew whither. He is an experienced sailor and having made two voyages on board the Jeune-Hardie, the ship that owned by Jean and Louis Cornbutte.

When the Jeune-Hardie was going to Bodoë, Norway, to an important business operation, with the command of Louis Cornbutte, André was the first mate of the ship. While their voyage, at the height of the Maëlstrom, on the 26th of April, they noticed a schooner that in danger. Louis and his two friends, the sailor Cortrois and the helmsman Pierre Nouquet, tries to save them. However they disappeared due to the fog and the boistreous sea. Thus, André take the command of the ship and get back to Dunkirk without the crew, was unable to save them.

The Jeune-Hardie manages to return to Dunkirk smoothly and André explains the incident to Jean Cornbutte.

After that, Jean Cornbutte decides to go on a trip with Jeune-Hardie to find Louis. Jean asks to André to be with him as the first mate. André abstained this offer first, but when he learns Marie will come with the crew, André immediately accepts this.

While the trip, André was success to help the crew, without a badly action. However, he often tries to convince Jean Cornbutte to return home, because Louis and his crew is dead and this trip will be futile. André's ultimate aim was return Dunkirk without finding Louis, and marry Marie, with the permission of Jean Cornbutte.

After their efforts were inconclusive and the crew were completely tired, André succeeded to convince Jean Cornbutte to return home. But, while André and Penellan were scouting the pole, he noticed a smoke, and tries to avoid it, because it is possible they are Louis and his crew. But Penellan notices the smoke too, the crew approaches it and encounters Louis and his crew. But unfortunately, they find Cortrois' corpse before they encounter them.

After, André befriended with the two Norwegians, Jocki and Herming. And Aupic joins them, and they start to act hostile against Louis and his crew. They remain silent for a while, but when their enemies starts to suffer because of the scurvy, André steals the lemons, the medicine for this disease. The four traitors declared the rivalry, and the 'war' against the others.

While Penellan is cooking meal, André provokes him. And Penellan tries to beat him but he is surrounded by the team. Later, Penellan calls for help and the crew starts to a fight. While they fight, three bears entered the ship and stars to fight the crew, one of the bears get André and attempts to kill him, but Louis shoots the bear and kills it, and saves André. But André couldn't stop his hatred and attempts to kill Louis. An other bear exists and approaches Louis, and attempts to kill him. André maniacally laughs and watches them, thinks the bear will kill Louis. But Louis dodges it and went downstairs, and tries to overpower André. While they fight, the bear comes and strangles them. The two rivals call for help to their colleagues. Penellan comes and shoots the bear. Louis succeeded to dodge the bear, but Vasling couldn't and gets squished by the bear. 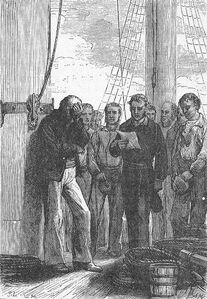 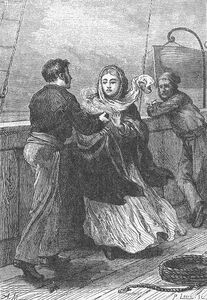 André decides to join the crew. 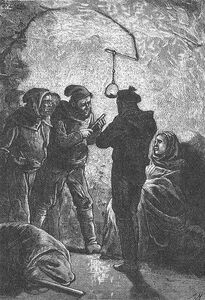 André looks at the thermometer. 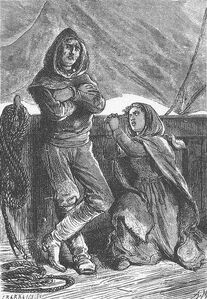 André doesn't care about Marie's beggings for giving back lemons. 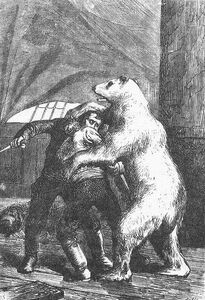 The bear strangles Louis and Vasling. Shortly before Vasling's death.
Add a photo to this gallery
Retrieved from "https://villains.fandom.com/wiki/André_Vasling?oldid=3825180"
Community content is available under CC-BY-SA unless otherwise noted.