Start a Wiki
Andréa is a villainess competing in the Shine Wrestling promotion. She is best known for her short stint as a TNA Knockout under the name Rosie Lottalove.

In October 2014, Rosie Lottalove came out of a two year retirement and began competing under the name Andréa, named after the legendary Andre the Giant. She has competed in a number of different independent promotions, mostly as a strong monster heel. Andréa debuted for Shine Wrestling in January 2015, doing so as the villainous enforcer for SoCal Val's Valifornia stable. After Marti Belle and Jayme Jameson defeated Solo Darling and Luscious Latasha, Andréa attacked both babyfaces. Her in-ring debut for Shine came on March 6, 2015, teaming with Jayme Jameson in a losing effort to Solo Darling and Crazy Mary Dobson. Later on in the main event, Andréa confronted fellow co-hort Nevaeh over her failure to defeat Mia Yim for the SHINE Championship, only to be attacked by Nevaeh afterwards.

Andréa picked up her first singles win as a member of the Shine roster when she defeated Nikki Storm at SHINE 26. Later in the event, the evil Andréa held Daffney hostage and forced her to watch Marti and Jayme put Solo through a table. At SHINE 27, Andréa and Jayme defeated Crazy Mary Dobson and Kimberly. At SHINE 37 on September 2, 2016, Andréa disbanded from the VAL-kyrie stable and formed a new villainous alliance with Kennadi Brink, LuFisto, and Amber Gallows.

Andréa is portrayed as a brutish and vicious villainess at Shine Wrestling, always willing to destroy anyone in her path. 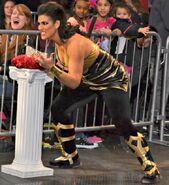 Add a photo to this gallery
Retrieved from "https://villains.fandom.com/wiki/Andr%C3%A9a?oldid=1985875"
Community content is available under CC-BY-SA unless otherwise noted.