Le Blanc (misspelling of his own surname)

Andre LeBlanc is a villain from the Teen Titans franchise.

LeBlanc apparently immigrated from France to the United States. When the Teen Titans were fighting the Brotherhood of Evil, Le Blanc decided to rob the Bank of Perez while they were away. Luckily, The Titans East stopped him and captured him very easily.

LeBlanc was recruited into the Brotherhood of Evil after unfortunately being broken out of jail. He was incapacitated by Beast Boy at the Brotherhood's base but still managed to fight in the final battle, in which he ended up being flash-frozen with the rest of the villains.

LeBlanc has no super powers but he can throw dynamite and is a master jewel thief.

André LeBlanc appeared in the Batman: The Brave and the Bold episode "Four Star Spectacular". He was seen in the middle of a robbery and was defeated by Batman. 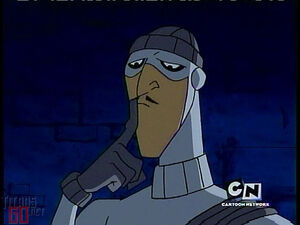