Start a Wiki
Andrea Fleming (aka Althea Morton) is the main villainess from the 2017 Hallmark movie, Framed for Murder: A Fixer Upper Mystery.

She was played by Laura Soltis.

Althea Morton was a yoga instructor and the love interest for Jesse Hennessy, the uncle of protagonist Shannon Hughes' friend, Jennifer. However, Althea's relationship with Jesse was part of her evil plan to obtain a necklace that once belonged to a Portugese princess. Althea's real name was Andrea Fleming, and she and her partner, Andrew Gossen, had known that Jesse acquired the necklace on a dive, so they colluded together to steal the necklace, which is worth $10 million.

However, Andrea had her own plans, as she had no intentions on sharing the fortune. She planted a bomb in Gossen's boat late one night, and it detonated the next morning, killing Gossen's boss but not Gossen himself. Later on, the evil Andrea killed Jesse at his home, and she kidnapped Jennifer after learning that Shannon was getting close to the truth. Andrea (her voice disguised)) later phoned Shannon demanding the necklace, threatening to kill Jennifer if she doesn't comply.

Andrea's reveal as the villainess began when Shannon inspected Jesse's home with MacIntyre Sullivan. Not only did they find the necklace, but they found a note written by Andrea that stated that Jesse could face prosecution if he sold the necklace. After finding the letter, MacIntyre showed Shannon a photo of Althea, only to reveal that she's Andrea Fleming. Andrea later phoned Shannon again, and was confronted with everything Shannon learned about her. The villainess ordered Shannon to meet her at the lighthouse with the necklace, and once there, Andrea held Shannon at gunpoint.

Andrea boldly admitted to her role, but claimed that Gossen masterminded the plan for her to get close to Jesse while he stole the necklace. She also felt that she deserved the entire fortune, claiming to have done all of the work. Ironically, Andrea learned about Gossen being alive from Shannon, as Shannon informed her about Gossen when he was believed to be behind the murder. With that knowledge, Andrea planned to kill Gossen and get away with the necklace, which she was dismayed to discover was left on the rail of the deck. Once Andrea retrieved the necklace, however, she suddenly fell through the deck--due to the fact that the lugbolts were pulled out by Shannon. Andrea was later arrested (off-screen) for the murders. 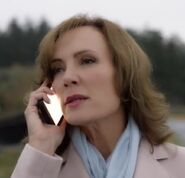 Add a photo to this gallery
Retrieved from "https://villains.fandom.com/wiki/Andrea_Fleming?oldid=3296990"
Community content is available under CC-BY-SA unless otherwise noted.