She was played by Elizabeth Ashley, who later appeared as the evil Vera Gerakaris in an episode of Murder, She Wrote.

Andrea Glassen is the next door neighbor of the film's main protagonist, Emily Hollander, and she is shown comforting Emily after she is the victim of a near sexual assault by Lawrence Obecny, a taxi driver. Andrea came to Emily's aid when the attacker went after her again, this time preventing him from entering the apartment. It was later revealed that Andrea actually sent Lawrence to assault Emily, as part of her twisted crush on her. Emily's forced erotic moans were recorded on tape, and Andrea kept that tape as part of her fantasizing of Emily. She had harbored an obssessive crush on Emily for a while; an obsession that has resulted in her seeing a therapist. Despite this, Andrea continues her obsession; constantly watching her from afar via a telescope. While doing so, Andrea sees Emily in a relationship with detective Bob Luffrono, which enrages her. She later confronted Bob and it was indicated that she killed Emily's pet cat, Jenny

The film's climax has Emily at Andrea's apartment, where the villainess confesses her love for Emily as well as her role in Emily's attack. Subsequently, the evil Andrea grabbed a switchblade and forced Emily to remove her sweater and moan for her, just as Lawrence did. During the encounter, Andrea is slapped by Emily, and is left in tears after Emily tells her that they will never speak to each other again. Though not shown on-screen, Andrea was assummingly arrested for her various actions. 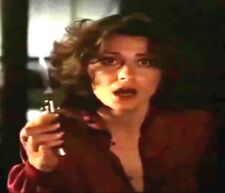 Add a photo to this gallery
Retrieved from "https://villains.fandom.com/wiki/Andrea_Glassen?oldid=3410820"
Community content is available under CC-BY-SA unless otherwise noted.