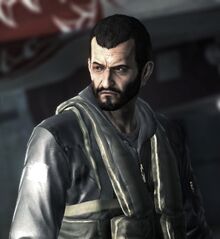 Colonel Andrei Markov is the main antagonist of Ace Combat: Assault Horizon. Markov is an ex-pilot of the Russian Air Force, having received the title "Hero of the Russian Federation" for his valiant efforts. He always flies an aircraft painted with a distinctive design of a shark's mouth, earning him the nickname and callsign "Akula".

In January 2016, Markov attempted to drop the superweapon Trinity onto the White House in a final act of vengeance, but Colonel William Bishop killed him and destroyed the weapon before it could cause any major damage.

Retrieved from "https://villains.fandom.com/wiki/Andrei_Markov?oldid=3886502"
Community content is available under CC-BY-SA unless otherwise noted.