Hurting or killing anyone who gets in his way.

Get revenge on Joe for biting his thumb and index finger off by killing him and make a fortune out of his pieces.

Andrei Strasser is the main antagonist of the 1998 Disney film Mighty Joe Young, the remake of the 1949 film of the same name.

He is a ruthless Eastern European poacher who murdered Joe's mother as well as Dr. Ruth Young, Jill Young's mother. However, in the process, Strasser loses his thumb and trigger finger after Joe bit him, and he swore revenge on the gorilla for the damage.

He was portrayed by Rade Šerbedžija, who also played Murad Hoxha in Taken 2, Mikhaylo Sczerbiak in Shooter and Boris the Blade in Snatch.

Andrei Strasser can best be described as ruthless, sadistic, remorseless, conniving, merciless and overall cruel in nature with no regard for any life but his own.

Strasser is also shown to be a very manipulative man, as he runs a fake animal reserve, while in actuality selling animal organs off the black market. He also manages to completely manipulate Jill into believing he was on her side and tricked her into believing he'd take good care of Joe back in Africa.

Strasser also has no remorse for attempting to kill people as well - best proven when a missed shot intended for Jill causes a deadly fire to spread throughout the carnival, endangering a child trapped in a Ferris wheel. This causes his henchman Garth to turn against him.

All and all, Strasser's powerful grudge against Jill and Joe leads to his downfall, as he is so intent on shooting Jill, that he doesn't notice the giant ape looming behind him until it's too late and Joe gives the wicked poacher his well-deserved and literally shocking demise.

One night, Andrei Strasser is ambushing a troop of gorillas. He shoots baby Joe's mother, as well as primatologist Ruth Young, mother of Jill Young. Strasser attempts to put the baby ape in a sack, but Joe bites off Strasser's thumb and trigger finger, and Strasser swears vengeance for his severed hand as he retreats. Before she dies of her wounds, Ruth tells Jill to promise her to take care of Joe, to which Jill agrees.

Twelve years later after the incident, Strasser, who is now running a fake animal preserve in Raja while really selling animal organs on the black market, is seen talking on the phone with one of his men, Pindi; refusing to believe there is a 2,200-pound gorilla until he hears the news about Joe and Jill Young on the Television. Strasser wants to get revenge on Joe for biting his fingers off, with the help of his main henchman, Garth.

At first, Jill fails to recognize Strasser as the poacher who killed both her mother and Joe's, since Strasser hides his right hand in his coat pocket. Strasser tries to persuade Jill that Joe would be better off in his wildlife refuge back in Africa.

Later, during a gala, Garth, uses a poacher's noisemaker to scare Joe into a frenzy. Joe trashes the gala, recognizes Strasser and tries to attack him. Joe is then tranquilized and placed in a concrete bunker. When Jill learns that Joe may be euthanized, she decides to take Strasser's offer. Strasser uses the truck to get Joe inside with Jill Young's help.

Meanwhile, the refuge director Greg O'Hara has realized that Strasser is a poacher (upon discovering a poacher's noisemaker that the maintenance had found) and goes after both Jill and Joe. On the way to the airport, Jill notices the half-glove covering Strasser's missing fingers and finally realizes who he really is. Just then, Strasser notices Greg pursuing them and pulls out his revolver, but Jill punches him in the chest, then leaps out of the truck and into the street. Joe sees her and rocks the truck over onto its side and escapes. Greg finds Jill, who reveals to him that Strasser killed her mother and plans to kill Joe and they rush off to find him.

Jill and Greg eventually locate Joe at a carnival where he is playfully wreaking havoc. Meanwhile, Strasser arrives at the carnival and attempts to shoot Jill to prevent her from exposing him. But Garth pushes Strasser's gun away from Jill, causing him to fire at a spotlight, which starts a fire and causes the Ferris wheel to break down. Realizing Strasser's true nature as a murderer, Garth quits, but the former knocks the latter out unconscious with his gun before confronting Jill.

Strasser eventually confronts Jill and attempts to shoot her, but Joe manages to sneak up behind him and grabs Strasser roaring in the evil poacher's face, before flinging him onto some electrical wires over a transformer. Unable to grip the wire due to his missing fingers, Strasser loses his grip and falls onto the transformer and is electrocuted to death, leaving only his prosthetic half-glove hanging from the wiring, thus also avenging both his mom and Ruth. 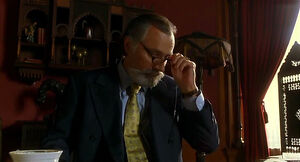 Strasser in his office. 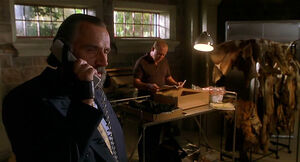 Strasser hearing Pindi talk about giant gorilla Joe, but he doesn't believe him. 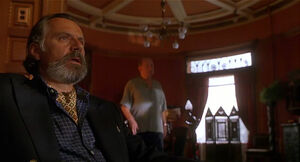 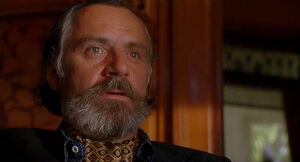 Strasser recognizing Joe as the baby ape who bit his thumb and trigger finger off. 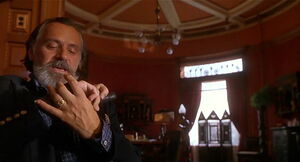 "Garth, book us two tickets to America. We are going to pay a visit to this incredible animal. I think I know how to convince his current owners to part with him." 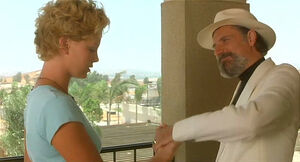 Strasser shaking Jill's hand with his left hand to throw Jill off suspicions of him. 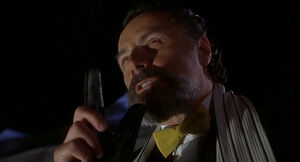 "So, you haven't forgotten me. Have you forgotten this?!" (holds up his hand glove covering his missing fingers) 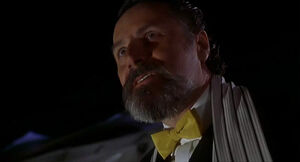 "I will get that for the paws alone. After we sell him off piece by piece, who knows how much we'll make?" 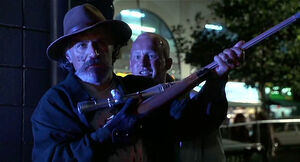 Strasser takes out his big gun after Jill and Joe escape his truck. 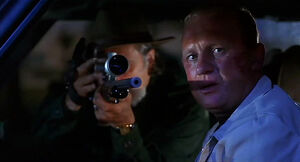 (Garth: No! You can't do that!) "If that girl starts telling people who we really are, our whole cover operation will be blown." (Garth: She's not an animal! She's a human being!) 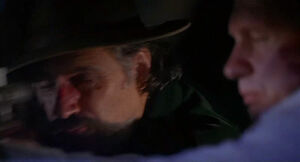 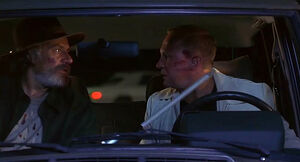 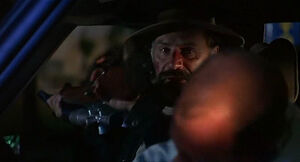 Strasser knocks Garth out with his gun. 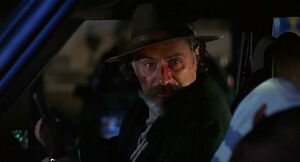 "Anything else on your mind?" 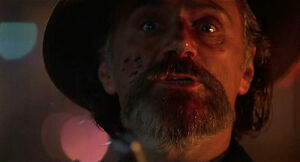 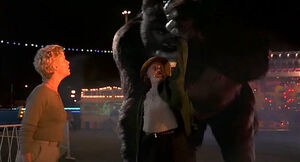 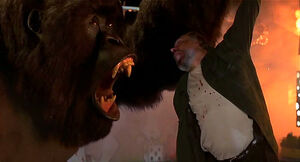 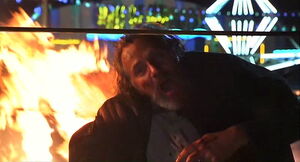 Strasser hanging on wires above a transformer. 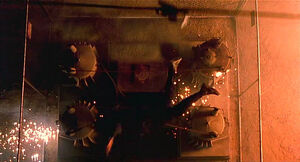 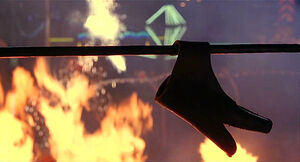