Elucidating his opinions and soliloques, with crude language.

Get Shaun into his crew of Skinheads (succeeded, for a while).

Get revenge on Pukey for nullifying him by throwing him out of his car (succeeded).
Accelerate the reputation of the Skinheads.
Dispose all of the migrated people out of England.
Kill Milky.
Maintain in power of his crew (all failed).

He was portrayed by Stephen Graham.

In his first appearance, Combo appears to be a psychotic bigot with extremely racist views on immigration as well as becoming prone to violence easily. However, he shows qualities of a good man standing up for his friends when the situation arises. After the first film, he appears to regret his previous actions and seeks redemption.

Little is known of Combo's life before the first movie. But according to the dialogue throughout the films, when Combo was at the age of seventeen, he attempted to fight Lol's abusive father, Mick, for molesting her, though Mick beat Combo severely and left him in the street for dead. Lol found Combo and was able to take him to a hospital. At some point, Combo and Lol got drunk and had a one night stand, Combo remained in love with Lol from then on. Later on, in 1980, Combo and Woody got into trouble for unknown reasons and ended up serving a three-year prison sentence. However, he never appeared to show any type of grudge against Woody for this. While in prison, Combo became friends with a fellow convict, Banjo, and the two became close friends afterward, running their block after dealing with an abusive black prisoner who kept stealing Combo's desert, this was where Combo's racist and white nationalist views slowly developed.

Upon his release in 1983, Combo (Along with Banjo) returned to Woody and the gang at a party and is greeted warmly. Here, Combo meets Shaun, a new young member of the skinhead group. However, tension begins when Combo talks about the dessert-stealing black prisoner in front of Milky (Woody insinuates that Combo was slightly racist even before his sentence). The next morning, Combo invites the gang to his flat and attempts to take control of the gang be giving them a long speech about immigration and the government's decision to hold the Falklands War, by this point Shaun becomes angered and attempts to strike Combo since his father died in the war. Combo takes advantage of this and brainwashes him into thinking that fighting against immigration will, in turn, be honoring his father's memory. Combo even manages to set several members of the gang against Woody by reminding them of how many years he would racially abuse Milky (Something he appears to regret) and how nobody would stand up for him. The only members who fall for his speech are Shaun, Gadget, Pukey, and Meggy, while Milky for short time becomes distant towards Woody but eventually joins Woody instead.

Combo takes the group to a National Front meeting and they sign up for the political party, but on the way back, Pukey expresses doubts towards over the group's racial intentions. Fueled by ire and vengeance, Combo proceeds to threaten him violently and jettisoning him, leading back to Woody's group. Combo and the group then engage in bigoted racial antagonisms, such as spraying racial remarks on walls with graffiti, threatening Indian boys playing football, and robbing Mr. Sandhu, a Pakistani shopkeeper who previously banned Shaun from his shop. Combo bonds with Shaun during this, who Combo sees as a father figure.

However, things turn for the worse when Combo tries to express his feelings towards Lol. Lol, being angry towards Combo for hurting Woody's feelings, rejects him and tells him that their one-night stand was the worst night of her entire life. Heartbroken, Combo approaches Milky and purchases cannabis off him and invites him to his flat, in an attempt to forsake his racist ways. While intoxicated, Combo and Milky bond, but Combo grows jealous of Milky's happy life and racially abuses him in an attempt to get him to fight. Milky merely smiles cheekily at Combo, who loses his temper and in revenge psychotically beats Milky unconscious over Shaun's protests. Combo angrily throws Shaun out of his flat for defending Milky and proceeds to smash a bottle over the back of Banjo's head who claims he wants to torture Milky as well. Combo furiously orders Banjo and Meggy out as he tends to Milky, only to see that he is apparently dead. Combo weeps in shame as Shaun comes back inside the flat and convinces Combo to get Milky to a hospital.

Ashamed of his actions, he leaves town. Three years later, in 1986, Combo arrives at Shaun's house unexpectedly one night, drunk and bloodied, as he collapses on his living room floor. Later in the morning, Combo tells Shaun that he has returned because his mother is dying. Shaun and Smell take him to his mother's house but see that she has already died. Combo takes a moment to pay his respects to his mother, and embraces Shaun as a friend, thanking him.

Later on, Combo decides to visit Lol at her house. He rings the doorbell several times, but there is no answer, so he looks through the living room window and sees Lol sobbing alone with Mick lying dead on the floor. Combo alters the scene to make it look like he fought and killed Mick in self-defense by smearing his fingerprints all over the hammer Lol used to kill Mick, and injuring himself with Mick's hand. Subsequently, Combo is sent back to prison, this time for manslaughter, though with a clear conscience.

Two years later, Combo is visited at the prison by Lol. Lol, realizing that Combo was the only one truly there for her all her life. She visits Combo to apologize for what she told him in 1983 and admits that she loves him (the exact nature of this love is unrevealed). During the visit, Combo asks about Woody and Milky and is shown a photograph of Lol's baby daughter Lisa (the result of an affair with Milky). Combo appears to be genuinely happy for Lol and doesn't make any racial remarks, hinting he may have abandoned his old racist ways. Combo also tells Lol that he is changing his life for the better and continuing his education with the GCEs. In his last scenes, he is seen spending Christmas alone in his cell, eating his lunch while studying. 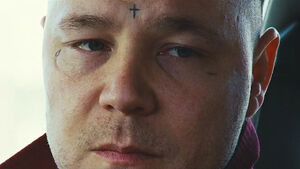