Andrew Garth was the main villain in the 1981 slasher film Hell Night and he was the son of the deceased Raymond Garth who had according to legend, murdered his entire family except for one of his sons, this in the end turned out to be Andrew Garth who was still hiding away in Garth manor.

A girl starts to scream hysterically looking upwards to the camera. During a massive college party, Peter Bennett, the president of the Alpha Sigma Rho fraternity, decides to make four pledges: Marti, Jeff, Seth, and Denise told to stay at the historic Garth Manor until dawn on hell night as part of their initiation. Peter and a group of others, along with his friends Scott and May, bring everyone together and tells them about the sordid history of the estate as they walk while he leads them. Twelve years prior, Raymond Garth strangled his wife Lillian to death and then proceeded to murder three of his children (Morris, Suzanne, and Margaret) due to their severe deformities. After the carnage, Raymond hanged himself. However, police never found the body of the youngest Garth child, Andrew. Legend has it, Andrew witnessed the murder of his entire family and may still be living within Garth Manor.

After the pledges get set up in the house, Scott and May assist Peter in attempting to scare them with mechanical devices and sound effects until they are quickly murdered one by one. May violently got dragged into a pit and got decapitated. Scott has his neck broken on the roof by a large, bare-handed man. Peter discovers Scott's body hanging from a wire and runs to escape without telling the pledges, but is attacked by an unknown assailant. He escapes, but gets lost in a garden labyrinth (a la The Shining) and runs into yet another assailant who impales him with a scythe. The audience realizes that there are two killers.

Meanwhile, Marti, Jeff, Seth and Denise discover the sound devices and bogus effects throughout the house set to scare them. After Seth and Denise have a sensual moment together, Seth excuses himself to go to the restroom, and a large, deformed hand covers Denise's mouth. Seth returns to discover May's severed head in the bed and runs away hysterically freaked out. As Jeff confronts Seth, Seth quickly decides to escape and seek help as Jeff and Marti stay behind. Seth tries to climb the spiked iron gate, but stabs his arm on a spike and falls down. Jeff suggests that he take off his boots and try again. Seth agrees and manages to scale the gate. But he promises to return. Seth ran back to the frat house pounding on the door for help around but no one was there.

Jeff and Marti search the house and discover Scott's hanging body with a rope outside a window. Jeff decides to go outside to look for the others and discovers Peter's corpse. As he runs away in horror, the camera focuses on Peter's hand. the gate keys grasped tightly. Jeff informs Marti that the others have been killed so they decide that it must be Andrew, but are unsure. While they lie in wait in a bedroom armed with a pitchfork, a mysterious shape comes up from the floor under a large rug to attack them. Jeff impales it with the pitchfork and it falls into the hole in the floor. Angry at the death of his friends, Jeff decides to go after it. Marti follows. As they walk through an underground tunnel, they discover dead bodies posed at a table with rats crawling on them. They discover Denise's corpse among the bodies. Suddenly, they see a disfigured man heading towards them and began chasing them. Jeff fights him but is knocked down and injured. He and Marti escape through a hidden exit.

Seth decides to head to the police station. After being disgruntled with the police who think he is pulling another Alpha Sigma Rho prank, still out of his anger Seth steals a gun from an abandoned office and tries to find any remaining pledges at the frat house. Finding no one except some drunken revelers who leave, he then suddenly carjacks a man without hurting him in the parking lot and manages to return to Garth Manor as a promise to his friends. Suddenly he was attacked by a man, and after a long scuffle, he shoots him to death. Obviously, Seth doesn't realize that there's another killer in the house when he calls out for Jeff & Marti. As they tell Seth the others are dead, an arm suddenly grabs him from out of the shadows and quickly drags him away. A gunshot is heard and only the shotgun appears sliding across the floor. As Marti decides to go for the gun the other killer leaps out to grab her. Marti escapes as he chases them upstairs but kills Jeff by throwing him out a window after he helps Marti out safely.

Marti makes her way through the garden labyrinth and discovers Peter is dead. As his body falls on top of her, she sees the keys and has to pry them from his hands. She makes her way to the gate, opens it and hot wires the car. Driving away, a hideous face appears from the roof. Marti screams as the glass shatters and a large hand tries to grasp her throat. As she tries to escape, Marti backs into the gate, bending it. As the car skids, Marti fights off the assailant and punches down on the accelerator as she speeds towards the gate, the killer looks in horror as the gate violently impales him. He spews blood, writhes in agony and dies. A stunned Marti shouts out and hits her head on the steering wheel sounding the horn as it fades out.

In the morning, the body is still on the car. Marti awakens slowly and manages to get out of the car. It is assumed she was the only survivor. She walks toward the camera in a daze as the final credits roll. 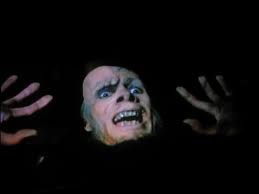 Andrew Garth being scary and creepy as usual.
Add a photo to this gallery
Retrieved from "https://villains.fandom.com/wiki/Andrew_Garth?oldid=3229922"
Community content is available under CC-BY-SA unless otherwise noted.