Create and preserve his ideal utopia in Rapture.

Kill Frank Fontaine and anyone else who opposes him (both failed).

Originally a Russian immigrant who became a wealthy tycoon in America, Andrew Ryan is the founder and governor of Rapture, a secret underwater city he built with the intention of creating a free market paradise where the best of humanity could escape from post-World War II society, make groundbreaking advances in business, science, art and technology and thrive without government, religious or moral interference. Once Rapture fell on hard times and Ryan's leadership is challenged by his business competitor and archenemy Frank Fontaine, as well as political rivals such as Sofia Lamb and Irish freedom fighter "Atlas", Ryan started betraying his own ideology to combat much of the dissent in Rapture. By 1960, Ryan had corrupted himself to the point that he was little more than an egomaniacal dictator obsessed with suppressing anyone he perceived as a threat to his city.

He was voiced by Armin Shimerman, who also played Dr. Nefarious from Ratchet & Clank and General Reginald Skarr from Evil Con Carne.

Early Life in Russia and moving to America

Andrew Ryan was originally born Andrei Rianofski in a village near Minsk in Russia (modern Belarus) during the rule of the Tsar. However, after the Russian Revolution of 1917 led to the Bolshevik Party rising to power. Seeing the oppression, Soviets as "trading one lie for another" from the tyranny of the Tsar, Rianofski chose to leave Russia in 1919 to go to America, anglicizing his name to Andrew Ryan in the process.

Arriving in America, Ryan integrated well into the country, believing wholeheartedly in the American Dream. Ryan soon rose to become a wealthy man, grateful for the prosperity America rewarded his hard work. However, Ryan's devotion to America began to waver in the 1930s when, following the Great Depression, then President FDR instituted social democratic policies to relieve the problems being faced. Having become distasteful of any kind of Socialism from his experiences in the USSR, Ryan saw the policies of the New Deal as a gateway to the Bolshevism practiced by the Soviets and believed those who benefited from others were parasites. Following the atomic bombing of Hiroshima by the United States, Ryan lost all his faith in America, seeing the creation of the bomb as a distortion of his ideals.

Seeking to build his own utopia, Ryan put his entire fortune towards the construction of Rapture; a community where "the artist would not fear the censor, where the scientist would not be bound by petty morality, where the great would not be constrained by the small." Ryan chose the bottom of the Atlantic Ocean as the location for his utopia, believing it to be a place the "parasites" could not touch.

Upon Rapture's completion, Ryan invited several thousand prominent experts in many fields to come live and work in Rapture unconstrained by any sort of government or regulation. Within Rapture there was only one rule, a rule forbidding contact with the surface in order to allow it to remain untouched by the "parasites" he sought to escape from. The unrestricted entrepreneurship and competition between the many businesses within Rapture led to a period of rapid innovation far beyond that of the surface. From 1946 to 1958, Rapture was a place of prosperity and freedom, embodying everything Ryan had envisioned it to be.

The culture of free innovation in Rapture eventually led to the discovery of ADAM by Brigid Tenenbaum. Ryan at first failed to recognize the applicability of Plasmid market, brushing off the concerns raised by his colleagues Rosenberg and Bill McDonagh, something which would eventually be one of the factors to foster Rapture's downfall.

Decline of Rapture and fall into Civil War

Ryan's vision would not hold forever and soon began to collapse under its own weight. As the city was predominantly filled with visionaries and experts seeking to make their own, this left few who were willing to take up the menial, but essential jobs needed for Rapture to function. The shortage of people filling these roles eventually triggered a widespread economic collapse throughout Rapture.

The breakdown of the economy and deterioration of Rapture soon gave rise to a small-time fishery owner named, Frank Fontaine who capitalized on the failings of Rapture by establishing Fontaine's Home for the Poor. Fontaine also took advantage of Ryan's one rule by creating a market for goods smuggled from the surface and using it to fund his criminal operations.

As Rapture continued to fall apart, Ryan began to face challengers for rule over Rapture. Among these was psychologist Sofia Lamb, whom Ryan had invited to Rapture to help the citizens deal with psychological issues stemming from the isolated environment. Lamb openly criticized Ryan's objectivist beliefs, instead countering it with a collectivist philosophy that ran directly opposed to Ryan's. Ryan chose to debate Lamb in debates, hoping to persuade the public back to his side, but was unable to stop public opinion from swinging in Lamb's favor. Eventually, unable to quell Lamb's growing support, Ryan chose to have Lamb detained at Persephone Penal Colony.

Recognizing the threat Fontaine represented, Ryan took sweeping action against him and sent his security forces to shut down Fontaine's smuggling operations. While the investigations were successful, they were unable to pin down Fontaine himself. Eventually, in contrast the beliefs Rapture was founded upon, Ryan began to implement a series of authoritarian laws, including one punishing smugglers with death. To further maintain order, Ryan had much of Rapture's security and infrastructure coded to his own genetic frequency so only he or those with his same genetic code could navigate it.

However, in 1956, Ryan inadvertently impregnated an Eve's Garden exotic dancer named Jasmine Jolene. Recognizing that the child shared Ryan's genetic code and would be able to navigate areas of Rapture than only Ryan had access to, Frank Fontaine bought the embryo from Jolene. Ryan eventually learned what Jolene had done and, upon finding out, killed her in a fit of rage.

Ryan eventually authorized an operation to put a decisive end to Fontaine's criminal enterprises. Though it seemed Fontaine had been killed, in fact he had faked his death. With Fontaine seemingly gone, Ryan again went back on his free market philosophy nationalized Fontaine's company Fontaine Futuristics, engaging in the very same "big government" behavior that he had sought to get away from. This move led to Ryan losing much of his support, including from his longtime friend Bill McDonagh, who resigned from the Central Council in protest. It was around this time that Ryan faced another viable challenger to his rule in the form of Atlas (who in fact, was really Fontaine under an alias).

At the start of a new year in 1959, Rapture became embroiled in a bloody civil war which would ultimately bring the downfall of Rapture, beginning when supporters of Atlas rose up against Ryan's rule. Ryan refused to reach a middle ground with the rebels or address any of their grievances, determined to fight them even if it brought Rapture's destruction. At the heart of the conflict was Plasmid, which was now being used by both sides to create unconventional weapons for the conflict. Ryan soon received a proposal from Yi Suchong on how to restore order to the city. Suchong suggested altering the chemical structure of the commercial Plasmids used by citizens to make them vulnerable to mental suggestion by pheromones. Ryan agreed, in spite of the betrayal it posed to his ideology by denying his citizens their own free will itself, believing that if Atlas won they would still lose their free will and become slaves to him. Thanks to this though, the civil war turned in Ryan's favor and Atlas was forced to invoke his "ace in the hole" to tilt things in his favor: Jack.

After arranging for Jack's arrival in Rapture, Frank Fontaine (as Atlas) sent Jack to kill Ryan, using the "would you kindly" trigger phrase to control him. Ryan initially assumed Jack to be an agent sent by the Russian K.G.B. or the American C.I.A., but after Jack safely escaped Arcadia, Ryan soon made the connection between Jack and Atlas and began to put the clues together regarding Jack's origin. Discovering that Fontaine was using his own son against him, Ryan decided to activate Rapture's self-destruct mechanism as a last ditch attempt to take out Fontaine.

He was soon confronted by Jack himself, who found Ryan playing golf in his office. Meeting his son face-to-face, Ryan reveals the truth to Jack about his past and how he is being controlled by the phrase "would you kindly" and how it was controlling Jack. After proclaiming the difference between a man and a slave to be "a man chooses, while a slave obeys", Ryan gave Jack the golf club and orders his son to kill him, dying as he declares his philosophy once more. With Ryan dead, Jack claims the genetic key to Rapture's systems from Ryan's corpse. With the Vita-Chamber in Ryan's office deactivated, Ryan is officially dead and cannot be resurrected.

Though long dead, Andrew Ryan's presence looms over BioShock 2, which takes place eight years following the first game and sees his old political rival Sofia Lamb rising to power in wake of the power vacuum created by his and Fontaine's deaths. 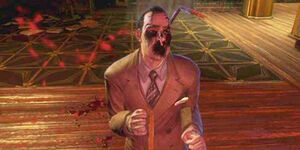