Collecting pieces of objects from his victims to add to his current outfit as spoils of war.

Sergeant Andrew Scott is a vicious and unsympathetic individual, even by standards seen in the darkest days of the Vietnam War. It is believed that he had gone completely insane and indeed by the time he is first encountered by Private Luc Deveraux (later to be code-named as GR44), he is a brutal madman who had taken to mutilating many innocent people via cutting off their ears.

At the beginning of the original film, Andrew Scott holds a boy and a girl hostage and confronts Deveraux, becoming enraged when Deveraux tries to reason with him. He shoots the boy dead and demands that Deveraux prove his loyalty by killing the girl. Devereaux refuses to kill an innocent so Scott attempts to shoot her himself, but Deveraux intervenes. Scott ends up killing her anyway with a grenade. Infuriated, Deveraux turns on Scott and the two soldiers shoot each other to death. The next morning, officials find the two men's bodies and order them to be frozen in ice and labelled "missing in action".

Sometime later, Scott and Deveraux, along with other recently deceased soldiers, are brought back to life with robotic implants and their memories are wiped. These revived soldiers are called UniSols. They are sent to Hoover Dam where terrorists are planning to blow it up along with some hostages. But terrorists are foiled by UniSols, involving Scott and Deveraux managing to kill many of the terrorists. Deveraux later regains parts of his memory after spotting two hostages resembling the two Vietnamese villagers Scott previously killed, and he recognizes Scott as the potential culprit.

Upon success of the mission and return to their mobile headquarter in the form of a modified 18-wheeler, Deveraux, Scott and the other soldiers are put in rejuvenation tanks to cool off because although they've become much stronger and bulletproof, their bodies need to cool off. Also during their cooling their memories are wiped on routinely basis.

Meanwhile a reporter named Veronica Roberts, who had been recently fired from her job and is in desperate need of a scoop, and her cameraman Huey Taylor sneak into the military base where UniSols are. While inside Veronica discovers one of UniSols who had been fatally shot during the anti-terrorist operation at Hoover Dam, contradicting UniSol commander's report that there had been no casualties on UniSols' parts. As she starts taking pictures the dead UniSol suddenly resurrects, astonishing Veronica who accidentally activates an alarm in the vicinity. Scott, Deveraux, and a few other UniSols are sent after Huey and Veronica, effortlessly arresting the pair.

Upon capture, Veronica and Huey plead with their captors in an attempt to negotiate their way out alive. Scott, instructed by the command center, demands the two reporters to hand over their 'film' (photos actually) about UniSols made by Veronica. When Veronica does not surrender the said film immediately, Scott summarily executes Huey, much to Veronica's and the command center's shock. Scott then prepares to kill terrified Veronica as the outraged command personnel frantically shouts at Scott to cease fire. Deveraux, having more of his memories returned upon seeing the death of a cameraman which resembles the situation Luc had back in Vietnam, knocks the gun out of Scott's hand and takes Veronica with him to a getaway vehicle. The pair drive off to safety all the while other present UniSols shoot at the couple. Scott, who has regained some of his memories as well, declares Luc a traitor.

Colonel Perry who is the leader of UniSol project, organizes UniSols and orders soldiers to follow them. Deveraux and Veronica takes refuge at a motel where she heals his bullet wounds by submerging him in a bathtub full of ice because he was aware that he needed ice to heal. :ater that night Scott and some other soldiers riddle their room with bullets, but they manage to escape.

Some time later they ambush Devereaux and Veronica at a gas station, but they are unaware that Deveraux had rigged the gas station to explode after he realizes that he had a tracking device implanted in his body and with Roberts' aid managed to remove it. Deveraux then used the tracking device to lure UniSols to a fiery trap. the explosion kills all but Scott and two of the other soldiers. As Perry was about to cancel the operation due to heavy losses Scott, now his memories fully restored, takes over the organization and kills Colonel Perry, most of the scientists, keeping their ears as a necklace like he had done in Vietnam as he still intends to hunt down Deveraux and Roberts.

Arriving at a western-themed bar and while interrogating bar's patrons to discover Deveraux and Roberts' whereabouts, one surviving scientist sabotages the interior of the mobile truck (accidentally blowing himself up in the process). Unable to utilize the truck's interior technological maintenance, Scott goes to a supermarket as a temporary hangout with two further incapacitated UniSols in an attempt to revive them; only one would recover. Infuriated as the pursuit of Deveraux and Roberts keeps getting complicated, Scott verbally lashes out at supermarket's frightened patrons until the police are called on to stop Scott. But Scott kills all the officers effortlessly.

Eventually after discovering more of UniSol origin, its secrets and how Luc came to be what he is, Deveraux and Veronica are arrested by police and taken on a prison bus. Scott and one last UniSol chase the bus on the road with his mobile truck HQ, murdering most of escorting police officers, including the bus driver. Eventually after a long chase all the way to the edge of a deep canyon, the two vehicles collide and crash off a cliff exploding on impact as Deveraux and Veronica roll out at the last minute, seemingly killing Scott and the other UniSol.

Deveraux and Veronica take refuge at Deveraux's parents' farm where they discover that 30 years have passed since Vietnam War and that Deveraux is in his 50s and that the implants and chemicals have preserved him. As Deveraux contemplated on years of memories he lost, Roberts comforts him by commenting he looks great for a 50-year old man. Just as things begin to settle down, Scott is revealed to be alive, have pursued the couple all the way to Luc's home, and takes Roberts hostage as well as Deveraux's parents to lure out Deveraux for a final confrontation.

Scott, refusing to accept that Vietnam War is long over and their personal enmity no longer has any meaning, engages a duel with Luc. Having injected himself with a super serum to make himself even stronger, Scott nearly beats Luc to death. Scott in his sadistic glee, has Roberts run for her life while he throws a grenade at her, seemingly killing her in a repeat of the situation in Vietnam. Deveraux attacks Scott in a rage, but Scott still possesses the upper hand due to his power serum.

Deveraux, beaten as he was, eventually manages to snatch the last remaining serum syringe from Scott and injects himself too which finally allows Luc to fight Scott on even terms. The two men then have a long brawl, with Luc pounding Scott just as savagely as Scott pummeled Luc previously. After sending Scott flying out of the barn, Luc corners Scott onto a wheat thresher and knocks Scott onto a wheat thresher spikes, impaling his archenemy who had caused him so much problems throughout his life, seemingly killing the psychotic warmonger. When Deveraux goes to inspect the body, Scott suddenly awakens and attempts to impale Deveraux in a final bid to die together. Deveraux breaks Scott's arm and activates the wheat thresher, pulling Scott inside and shredding him to bloody bits. It is also revealed that Veronica survived the grenade blast as a piece of machinery had been shielding her.

Scott appears in a slightly retconned version of the finale of the first film, he then becomes a posthumous antagonist throughout the rest of the film. Footage of his final battle with Luc is shown later on when Otto Mazur takes a look at the footage, saying that Deveraux's actions undermine the thought of bringing him back.

In the 2009 sequel film Universal Soldier: Regeneration, an upgraded clone of the now deceased Andrew Scott is created by Dr. Colin. Since Scott had serious mental issues, the clone shares this trait and ends up killing his own creator. Towards the end of the film, Deveraux once again faces off against the new and improved Scott and impales him through the forehead with a lead pipe. He then fires a shotgun through the pipe, blowing Scott's brains out.

After being revived once again, Scott is hired by a now rogue Deveraux to be his new lieutenant, in the UniSol uprising. Scott and his men are first seen relaxing in a brothel, before being ambushed by a government controlled UniSol, who proceeds to slaughter his men. When confronted by the assassin, Scott easily defeats him, before injecting him with a serum that frees him from government control. Later, Scott is seen giving a rousing speech to his fellow liberated UniSols, as he announces the "Day of Reckoning" is at hand.

During John's storm of the unisol base, Scott attacks him in the armory, proceeding to engage in a brutal fist fight while pulling guns off the nearby racks to try and shoot each other. After both firing at each other with a large portion of the armory's guns, they get into a melee battle, with Scott armed with a machete, while John duel wields knives. Eventually Scott gets the upper hand and kicks John into a nearby wall, before trying to grab a bazooka. But as he picks it up, John attacks him from behind and stabs though his hand. Scott looks at the knife that's still jammed and his hand, before smugly saying that's "the spirat soldier". John then kicks the knife into Scott's lower jaw, killing him, as John picks up his machete.

Scott displays his psychotic nature in front of Luc Deveraux.

Scott, now a UniSol (Universal Soldier), cooling down in a cooling unit.

Scott labelling Deveraux as a traitor.

Scott and a group of UniSols attack Deveraux and Veronica Roberts at a motel.

Scott storms a supermarket believing he is still fighting in Vietnam.

Scott chasing down Deveraux and Veronica in a truck.

Scott at the Deveraux family's farm.

Scott is impaled on a wheat thresher, seemingly dead.

Scott is chopped to pieces inside the wheat thresher. 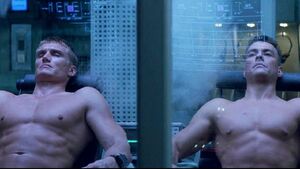 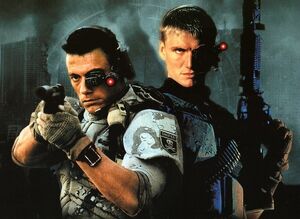 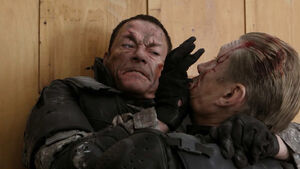