Replace Douglas.
Capture all the other creations.

Andrew 1 and Andrew 2, collectively known as The Andrewoids, are characters from Todd "LilDeuceDeuce" Bryanton's "Dr. Monster" YouTube music video series. They are a pair of robots ordered to replace Dr. Monster's henchman Douglas as his new henchmen, but have more sinister goals in mind.

After Dr. Monster gets fed up with his assistant Douglas, he goes online on Cyber Monday and orders new henchmen: the Andrewoids. They are a pair of robotic assistants that are programmed to be polite, being modeled after Canadian stereotypes. They arrive, and immediately begin singing about their greatness, and how they are the henchmen of the future. They claim to be friendly and polite, and capable of anything. They shame Douglas for being human, and congratulate Dr. Monster for replacing him as they make him comfortable. They antagonize Douglas further by mocking him, beating him in chess, and destroying his Apple iPhone.

Douglas retaliates, calling them out as soulless machines and showing how he is superior with his creativity and intellect. The Andrewoids are mostly unaffected, and soon team up with GLaDOS to fill the lair with poison gas that knocks out Dr. Monster. As he is out and dying, the Andrewoids capture and imprison his other creations: the Mistletoad, The Leperchaun, the Leopardchaun, Frosty the Bro-man, Deady Bear, Hampire, and Zombeef.

Just as it looks like the Andrewoids have won, Douglas comes in and fries their CPUs with a paradox and a pi equation. He then picks them up with a crane magnet and throws them to a lava pool. Just before falling in, they freeze and buffer, so it is unknown if they landed and died or remained in a malfunctioning state. Douglas wakes up Dr. Monster, and all is resolved.

In The Eggsecutioner video, it is shown that the Andrewoids are still stuck buffering over the lava pit.

The Andrewoids share identical personalities that appear as polite, hospitable and cheery, but are actually traitorous and malevolent. They view machines as superior to organic life, and seem to want to destroy it. They are also shown to be cunning and manipulative, using their charm and facade to lull victims into a flase sense of security. 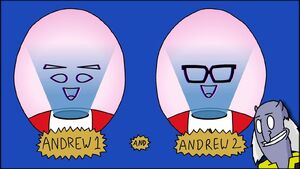 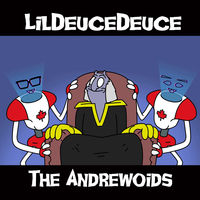 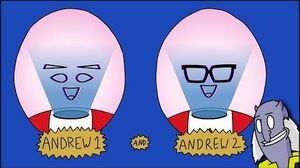 Dr. Monster The Andrewoids LilDeuceDeuce
Add a photo to this gallery

Retrieved from "https://villains.fandom.com/wiki/Andrewoids?oldid=3849656"
Community content is available under CC-BY-SA unless otherwise noted.