Kill Goku and the Z-Fighters (failed).

He was voiced by Yukitoshi Hori in Japanese and Todd Haberkorn in English.

Android 19 has chalk-white skin and is extremely fat, with a high-pitched voice. Like Android 20, he can absorb energy through small orb devices on his hands.

He also bears a striking resemblance to Majin Buu in some ways. Most notably his obese figure and face.

Android 19 is fiercely loyal toward his creator, Dr. Gero. He relies on absorbing Ki from people as he has no remorse when he followed Dr. Gero's order for world domination and destroy Goku and the Z-Fighters for revenge. When lost his hands, he revealed to be a coward when running away from Vegeta.

Dr. Gero was made into Android Human 20 by #19. Together, the two androids attacked a city where they encountered most of the Z Fighters. #19 fought Son Goku, who, with his Super Saiyan powers, had the advantage, but when Goku shot a Kamehameha wave at #19, the android absorbed it and increased his power. He then beat up Goku, who then was attacked by a heart virus. #19 beat Goku up while he was unable to fight back. While Goku is more vulnerable when he is not a Super Saiyan anymore, He then sits on top of Goku (severely injured him with his immense weight and pinned him down by stepping his arms with his feet) and began draining his energy when suddenly, Vegeta attacked him. As Yamcha got Goku back to his house to take the medicine for the virus, Vegeta transformed into a Super Saiyan, revealing for the first time that he had achieved this transformation.

Vegeta fought #19 and beat him up. #19 grabbed Vegeta's arms and began draining energy from him, but Vegeta, despite losing a bit of energy, tore #19's hands off. From #19's reaction, Vegeta confirmed a question he had asked earlier, that androids do experience fear. #19 tried to run, but Vegeta destroyed him with a Big Bang attack, leaving only his lifeless head. Trunks saw the head when he returned from the future to fight the androids, and did not recognize him.

In Dragon Ball GT, Android 19 returned from Hell along with several other dead villains. He was killed when Trunks and Son Goten blew him up with an energy blast into the alley, again leaving only his head, which ironically, was the same way he died the first time. Even more ironic, one of the people who killed him was Trunks; the son of his first killer.

In TeamFourStar's Dragon Ball Z Abridged series, 19 was portrayed as Dr. Gero's incompetent sidekick, who was supposedly working on a Windows 8 engine. In his first appearance, he and Gero walk around the city attacking anyone they see, being referred to as an "inconspicuous man and mime" by everyone they attack. When they first see Yamcha, 19 states that there is a 99% percent chance he is Son Goku (later stating that he is 85% percent sure upon viewing his scar.) and the two attack and nearly kill him. When confronted by the rest of the Z fighters, Piccolo leads them to a life less desert so they can battle. 19 begins to load his Murder.ExE program so he can fight, but the program doesn't load properly and he not only sends a report about this (which Gero told him not to do), but he is also mercilessly pummeled by Goku. While being repeatedly punched by Goku, he gets on Gero's last nerve, who orders him to work properly or he will "SHOVE MY BOOT UP. YOUR. ASS!" 19's Murder.ExE program finally starts to work, and to make matters worse, Goku has a heart attack due to high cholesterol. When he's about to kill Goku, Vegeta shows up and transforms into his Super Saiyan form. 19 activates his "self destruct sequence" when he attacks Vegeta, who quickly finishes him off, all while making jokes about the android's weight. After his body is destroyed, Krillin comically throws a senzu bean at his head, leading to Vegeta throwing a dog biscuit at him as well, similar in fashion to when he did that to Guldo. Later on, Trunks finds his head and mistakes him for an over weight, robotic Choutzu, only to realize that he is a new android.

Android 19's powers are similar to the other androids. He is able to fly, generate energy based attacks, and absorb power levels with the red orbs on his palms. He is also much stronger than any non ki-user.

His Power Level is listed at 10,000,000 in Scouter Battle Kamehameha. This means Goku would have likely killed him if not for the heart virus.

Android #19 can absorb Ki Energy (and possibly other forms of energy) through the red pulsars in his hands. When he does, he can add the Ki Supply to his own. This amplifies his Superhuman Abilities as shown when he became stronger than Goku after absorbing his energy. It appears, however, that he cannot absorb Ki from particularly powerful beings with Power Levels much higher than his own as shown when he lost against Vegeta who let him asborb some of his KI on purpose. However, it's possible that Vegeta lowered his power level to make his powers useless.

A rush attack. It is a very fast combo consisting of a punch across the face, an elbow to the back, a knee to the midsection, and a powerful Double Axe Handle to the midsection, inflicting a high amount of damage. This is how he defeated Goku while he was weakened by the heart virus. 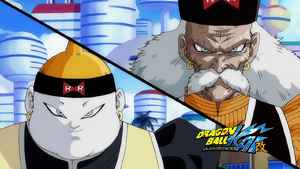 Android 19 and Android 20 in eyecatch