Andromon is a Ultimate Level Digimon, reminiscent of Android. He can fire spiral swords from his hands, and in addition, the missiles he fires can move on their own and shoot.

In Digimon Adventure 01, When the DigiDestined found Andromon in his factory, he was shut down, and stuck in the machinery until he was pulled out, and at the same time Devimon’s Black Gear grabbed him by brainwashing him badly. He then began chasing the DigiDestined around the factory and killing them at Devimon's will. The Digimon partners of the two DigiDestined did not succeed against him, but at the last minute Izzy Izumi caused his partner Tentomon to develop into Kabuterimon, which freed him from the influence of the Black Gear thanks to Kabuterimon.

In Digimon Adventure 02, When the Digimon Emperor tried to find Davis, T.K., and Kari, he used Andromon to brainwash him with the Dark Ring. When he met Davis, T.K. and Kari, Davis and T.K.'s Digimon partners couldn't stand him. But when he saw familiar things and faces, he did not operate under the Dark Ring and was released from control of it, after which Ken Ichijouji, the Digimon Emperor, began to realize that the Dark Ring was not enough to control the Ultimate Level Digimon.

In Digimon Adventure:, One Soundbirdmon brainwashed Andromon, and Andromon attacked Mimi and Palmon and killed Guardromon, who protected them. Later, Palmon evolved into Lillymon and managed to capture Andromon inside the vegetation he had grown, allowing the Chosen Ones to flee. 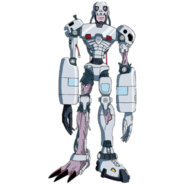