Andorf (in the Japanese version)

Obtaining power and the ability to spread destruction throughout the Lylat System.

Emperor Andross is the main antagonist of the Star Fox franchise. He is a malevolent primate scientist who seeks out to take over the entire Lylat system and has clashed against the Star Fox team on many occasions. He's the arch-nemesis of Fox McCloud due to possibly murdering/brainwashing James McCloud. 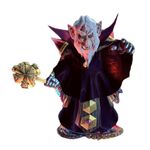 When he was younger, Andross was once a well-intentioned, authoritative and respected scientist. Unfortunately, his increasing lust for power drove him to the brink of madness, presumably by damaging his brain. He was eventually banished from Corneria to Venom after his refusal to terminate his increasingly unethical experiments resulted in the destruction of a large portion of Corneria City and he is now bent on ruling the entire Lylat System.

In Star Fox SNES, Andross himself is not fought, but he does sic a metallic face against Fox when the latter makes his way into the centre of Venom, where Andross makes his lair.

In Star Fox 64, Andross is once again faced at the core of Venom. He has two forms.

During his first phase, Andross attacks with his two hands. One attack has him throw a punch, another a slap, and then an attempt to crush Fox between his palms. He can also suck Fox into his mouth. If Fox avoids him, Andross will spit out rocks, which can be destroyed for health or bombs. If Andross eats Fox he will spit him out for damage. The crystals on his hands are his weak points. His main weak points, however, are his eyes. If they are shot before his hands are destroyed, he will shoot an energy wave. Shooting a bomb into his mouth will stun him long enough to do massive damage. The second phase occurs after his hands are destroyed. It is basically the same except Andross's attacks which involve his hands are now disabled.

Once his head is destroyed Fox will fight Andross's brain. Andross sends his two eyes after Fox, which shoot lasers at him and are attached to him by electricity. Fox can destroy these with a few hits, and can get behind them by doing a loop. Once the eyes are destroyed, Fox must attack Andross's weak point, his cerebellum. Andross will eat Fox and spit him out if the latter gets too close to him. He can also teleport away from Fox, usually behind him, and if he takes damage may follow him around. Also sometimes when he takes damage there will be small blobs of what is most likely blood, which can damage Fox if he flies into them. He does not have any other attacks. Once defeated, Andross will be destroyed in an explosion created by the last of his power to take Fox down with him.

Andross retains his attack pattern from when Fox McCloud fought him Star Fox 64.

The battle is similar to that of 64. After chasing the Krazoa God statue into outer space, Fox McCloud realizes that his rival is still alive and that things are not done.

At the start, before Fox can fight Andross straight on, he must first fight the Krazoa head on the back of Andross' head. He attacks with a sonic energy wave from his mouth. Fox must shoot the Krazoa head's eyes and the crystal on his forehead. Once all three are gone, Andross will turn around. He attacks with his two hands, which are vulnerable before they attack and must be shot to destroy them. After attacking Andross will try to inhale Fox, who must barrel roll or boost to the side of the screen to avoid it. Afterwards, Andross will spit out rocks (which may contain health). If he eats Fox he will spit him out for damage. Once the hands are destroyed Andross will turn around and the entire process must be repeated, except this time the Krazoa head shoots the same ships from Dragon Rock at Fox, and his hands can shoot energy waves.

Once his hands are destroyed a second time, Andross will begin to inhale Fox, which cannot be escaped from, until Falco suddenly returns and stops Andross. From here, Andross will send more of the yellow ships at Fox and spit out rocks. As he does, Falco will fly by and give Fox a bomb. After Fox gets a bomb, he must shoot his bomb into Andross's mouth as he tries to inhale him. This will turn his head transparent and make his brain vulnerable. Fox must focus his firepower on the brain (which has a health meter), but Andross often waits for a few seconds and charges at Fox, who must dodge every few seconds to avoid this. Timing Andross's attack pattern is a good way of avoiding it, and he only charges three times while transparent. Eventually, his head will become visible and the process must be repeated until Andross is defeated.﻿

After Fox McCloud makes his way to Andross's room, the battle starts.

Andross's battle in Zero is similar to his 64 battle, but the way to defeat Andross is different. First, Andross builds a massive cylinder barrier to cover himself. The barrier attacks Fox by firing debris from certain points of itself. Fox must find an opening on the cylinder to face Andross inside. Once he does, he must turn the Arwing into its Walker mode to venture inside. Once Fox is inside the barrier, Andross's head then turns metallic and summons two hands. The hands will try to crush, grab, and punch the Arwing, so Fox must outrun or fly away to avoid the attacks. During the attacking animations, the hands will show a red (turns yellow after a certain amount of damage is dealt) symbol on the palms, so Fox must shoot at the symbols to damage the hands. When one hand is destroyed, Andross charges a massive burst of energy, which will severely damage Fox if he stays inside the cylinder barrier. The energy burst is released as giant lasers from the openings of the cylinder, so Fox must maneuver around the cylinder and avoid the lasers before it is safe to re-enter the cylinder. During the second phase (when one hand is destroyed), Andross may also try the Scrapworm's grapple attack.

Once the second hand is destroyed, Andross releases another energy burst, which must also be avoided before the penultimate phase of the battle begins. Once again, Fox must make his way around the debris.

Now limited to a head, Andross attacks Fox by biting him, spitting out fragments, and shooting laser beams from his eyes. To damage him, Fox must shoot into Andross's mouth when it is opened to hit the core of Andross. After enough damage is dealt to the core, Andross is stunned and Fox must maneuver to the other side to hit a red gem located on the back of his head. The timing of Andross's stun is limited, so Fox must hurry in order to deal plenty of damage to the gem. Once the gem on the back of his head receives enough damage, Andross's barrier collapses and his head begins breaking apart. Fox makes his getaway.

As Fox tries to make his getaway from the exploding Venom, Andross attempts to take his enemy down with him by biting the Arwing. Andross is behind the Arwing, so Fox is unable to damage him. Eventually, an illusion of Fox's father distracts Andross and forces him to turn around. Fox then turns his Arwing around and attacks the gem on Andross's head (optional), destroying him and escaping Venom once again.

Andross made appearances in Super Smash Bros. Brawl for the Wii, Super Smash Bros. 4 for the 3DS and Wii U, and Super Smash Bros. Ultimate for the Switch where he can be sent out as an Assist Trophy. Strangely enough, this is the SNES Star Fox's Andross (which is a different timeline from the main canon of 64, Adventures, and Assault). He attacks by shooting blocks at his summoner's opponent.

In Ultimate, Andross appears as three spirits, all primary grab types. The first, based on his SNES Star Fox appearance, can be summoned using the cores of Porygon and the Commander. The second, based on his Star Fox 64 appearance, is fought against Ganondorf on the Venom stage with low gravity and Andross summoned as an Assist Trophy and the Sector Omega music playing. It can be enhanced to Andross's Brain, which boosts the fighter's stats when their percentage is above 100 percent.

Retrieved from "https://villains.fandom.com/wiki/Andross?oldid=4022348"
Community content is available under CC-BY-SA unless otherwise noted.