Talking About Cornell
Sailing with his Family

Get approval from his boss (formerly).

Outdo Dwight Schrute (succeeded, but later failed).
Marry Angela Martin (failed).
Have a long time with a relationship with Erin Hannon (failed).
Be a Manager.
Be an Actor (both succeeded).

Andrew Baines Bernard, Jr or better known as Andy Bernard was the main antagonist of the first half of Season 3 (before being replaced by Jan Levinson) as well as the main antagonist for the entire Season 9 of The Office. He serves as the rival of Dwight Schrute throughout season 3-5, and becomes one of the main protagonists of the show starting in Season 6.

He was played by Ed Helms, who also played as The Once-Ler during the 2012 animated film The Lorax, Number Two in Meet Dave, Brad Gurdlinger in We're the Millers, and Mr. Krupp in the 2017 animated film adaption of Captain Underpants.

When he is first introduced in Season 3, Andy was an annoying salesman who constantly kissed up to his boss. After having a major meltdown at an office party, he is sent to anger management. Upon returning, Andy becomes a lot nicer. While he can still be annoying, he is much more friendly and likeable to everyone. However, in Season 9 he is sent to outdoor training to help boost his confidence, but instead he becomes cockier and meaner to all of his co-workers is rude to his girlfriend, Erin.

Andy's family were the first pilgrims to arrive in the country. It was later revealed that Andy's ancestors was slave owners. Andy's birth name was Walter Baines Bernard, Jr after his dad, but was later changed after his dad favored his younger son. In High School, he was bullied a lot for being suspected to be gay. Andy graduated from Cornell University in 1995.

Andy was first introduced in the episode Gay Witch Hunt as a co-worker at Jim's new job at the Stamford branch. Jim tries to pull a prank on him But not taken lightly, Andy throws a small tantrum. When the Stamford branch shut down. Most of the employees started working in Jim's old job inside the Scranton's Branch. Andy started a rivalry with Dwight to get improve from their manager, Micheal Scott. Andy tries to be more closer to Micheal by hanging out to get improves in his job. After Micheal gets annoyed with him, Jim and Pams pulled a prank on him by hiding his phone. Andy has a breakdown and punches a hole in the wall between Micheal's Office and the conference room. Micheal sent him into anger management.

In season 4, Andy returns to the office after being pepper spray by Dwight for might being a threat again. During the episode Launch Party, Dwight and Andy develop a friendship. He also develops a relationship with Dwight's then-girlfriend, Angela. He later asks out Angela by singing ABBA's take a chance with me with his colleagues through the phone. After the Dunder Mifflin moved their parking space, Andy and Kevin team up, and form The Five Families, which are the five company's managers around Scranton.

In seasons 5, Andy proposal to Angela during the fair well party for Toby. While Andy and Angela are trying to look for a wedding place. Angela is having a secret affair with Dwight behind Andy's back. Andy and Angela pick Dwight's Farm for their wedding as they do some farm work, as Dwight secretly married Angela without her consent. During the office's Christmas Party, Phyllis found out that Angela and Dwight were having affair with each other. After Andy knew about the affair, he broke up the engagement with Angela.

In Season 8. Andy became manager after Micheal left and Robert California went to become CEO of the company. 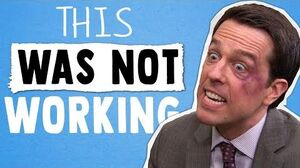 How The Office Fixed Andy Bernard In A Single Episode 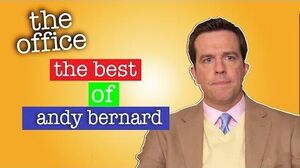 Retrieved from "https://villains.fandom.com/wiki/Andy_Bernard?oldid=4229825"
Community content is available under CC-BY-SA unless otherwise noted.