Anemone is the main antagonist of the anime series Eureka Seven. Though she is one of the characters that is gets the primary focus, she is considered a villain protagonist. Eureka is mentally unstabled and a merciless killer.

She was voiced by Ami Koshimizu in the Japanese version, and by Kari Wahlgren in the English version.

Before things got crazy for her, Anemone was born a normal human girl, she had a happy and carefree life with her parents and lived a happy life. However, all that changed when after The First Summer of Love, several civil wars broke out, and she lost her parents during the chaos, after which Anemone suffered from Desperation Disease. Anemone was then taken in by the Federation military where they proceeded to conduct human experiments on her which, needless to say, weren't very humane. Anemone was the only one to survive those experiments, becoming the first artificial corelian, and because of that her hair, turned pink and she had eyes just like Eureka, but she was mentally unstable afterwards.

In the beginning, Anemone wasn't a friendly person; she was cold, very unstable, and if you're not careful, you could end up on the wrong end of one her violent outbursts. Although she only acts like this when she's drugged up, they have to, because otherwise, she'd never pilot The End since she always seems to be afraid to do so.

Anemone also seems to have great deal of respect and admiration for Dewey Novak, and will do anything he says without question. on the other hand she treats Dominic as crazy because she thinks he doesn't understand what she has to deal with. That said however, deep down she hates Dewey with a passion, and the only reason she puts on that act is to avoid being cast aside or even killed. Anemone is fearless in combat and will risk her life as Dewey wishes it regardless of how bad things get.

Anemone is extremely fearless fighter, and seems to have a knowledge on martial arts, she seems to have enhanced strength, durability, agility, and reflexes. She is also skilled in the use of guns and knife. 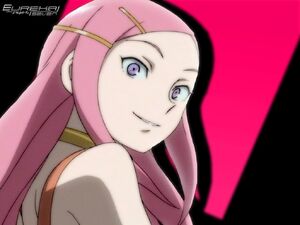 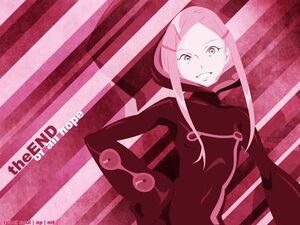