Aid Ajax in his plan (all failed).

Angel Dust is the secondary antagonist of the 2016 superhero comedy film Deadpool, the eight installment of the X-Men.

She is a mutant created by the Weapon X program and the right-hand of Ajax. Dust assists her boss in trying to kill Deadpool and his mutant friends when Deadpool tries to get back at him for deforming him physically.

She was portrayed by Gina Carano, who also played Riley Hicks in Fast & Furious 6.

When Wade Wilson suddenly collapses one night and is diagnosed with multiple organ cancer, he reluctantly leaves his girlfriend Vanessa to undergo an experiment to cure his cancer. At the Weapon X facility, he meets the project's leader Ajax who introduces Wade to Angel Dust. As the serum Wade is injected with needs adrenaline to cause the mutation, Ajax leaves Wade with Angel, who tortures him for days to ensure the mutation. After the mutation has successfully been caused, Ajax tells Angel to put Wade back into a chamber that drains the oxygen out of it, causing the inhabitant to slowly suffocate before pumping the oxygen back in. While Angel does so, Wade headbutts her, stealing a match from her in the process. Angrily, Angel tries to beat Wade but is stopped by Ajax, who tells her that they probably owed Wade that.

After Wade has become the masked Deadpool and is out for revenge, Ajax kidnaps Deadpool's ex-girlfriend Vanessa and tells Deadpool to meet him on a decommissioned aircraft carrier at a scrapyard. When Deadpool, accompanied by the X-Men Colossus and Negasonic Teenage Warhead, arrives at the scrapyard, Ajax orders Angel to kill them. Angel jumps from the aircraft carrier. Deadpool tells her that she is far to masculine for him and that this is the reason he brought Colossus. Colossus then approaches Angel but she simply hits him, the force of the impact lunging him through the air. Deadpool then corrects himself, stating that it was the reason he brought Negasonic. Negasonic then attacks Angel with her destructive powers, knocking her back into a shipping container.

Deadpool then advances onto Ajax, while Angel fights Colossus and Negasonic. Eventually, Angel manages to overpower Colossus and uses a steel rope to strangle him. Witnessing this, Negasonic unleashes the full potential of her power, causing a giant firestorm which blasts Angel off Colossus. Later she is revealed to be still alive as she gets taken away from Colossus with Negasonic.

It is unknown what happened to Angel Dust afterwards, but thanks to her invulnerability, it's likely she that she is still alive. 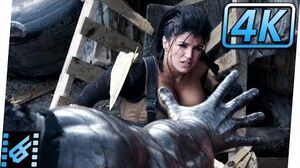