Angel Dust is a recurring antagonist in Brickleberry. He is the PCP-addicted leader of a biker gang called Satan's BFFs. He and his gang are so dreaded and feared, that none of the cops are brave enough to stop them.

In "Two Weeks Notice", Angel Dust applied for a job at Brickleberry National Park and before Woody, (his employer), could even ask his first question, Angel Dust jumped right into asking him what his policies were on PCP. Woody said that it was not only against the rules at his park but also illegal in these United States. Angel Dust was surprised and was sure it was legal in America. Woody kicked him out but Angel Dust refused to leave and continued to rave about how much he loved smoking drugs, especially angel dust. Later on, Steve snorted some PCP in a disgusting public restroom with Angel Dust by his side.

In "Crippleberry", Angel Dusty worked a carnival ride but had to shut it down once he got high on so much angel dust he could no longer function. This was completely unfair but when Steve called him out on this, Angel Dust, still high as a kite threatened to eat his face off.

In "My Way or the Highway", Mayor Nina Melcher built a highway that went straight by Woody's cabin and Malloy decided to take advantage of it by turning it into a rest stop. Angel Dust came in so that he could use the bathroom. When he came back out, he said that he clogged the toilet and then left, completely screwing the company over.

In "Old Wounds", Angel Dust's model and voice appeared as one of Woody's Vietnam war veteran friends from The Red Skulls. However, his name was Hoppy' and one of his legs was missing, due to a war injury. "Hoppy" pointed out how weird it was that Woody was the only member of The Red Skulls to escape the war without an injury, now knowing about how Woody betrayed Jack Abowski to avoid getting hurt.

In "Cops and Bottoms", Angel Dust had his first major role, when he was roughhousing at the bar with the rest of his biker gang, Satan's BFFs. Steve, who was now a cop, came in to stop them, asking them even so kindly to stop the violence. Angel Dust threatened him, saying that the last cops who came in to stop him got decapitated and that their heads are currently mounted on the wall like animals. Steve asked him what his mother would think about this mindless killing and Angel Dust showed him that he killed his own mother in the same way. Because Steve kept pestering them to stop bothering them, Angel Dust decided it was time to "deal with him". Rodney asked if they were going to jerk him off and Angel Dust got mad at his stupidity and slapped him. Angel Dust said that the real way they'd deal with him into give him a "dirt slide ride", which was tying him to his motorcycle and driving him around in the streets. While getting dragged around, Steve remembered that he forgot to put the parking break on his police car and it rolled down the hill and crashed into the clubhouse, blowing it up. Angel Dust was so mad that he chased after him and tried to murder him. Angel Dust chased him all the way back to Brickleberry National Park and when they were about to kill him, Steve made a deal with him, saying that he would let him take over his park in exchange for his life and with that, Satan's BFFs took over Brickleberry National Park and wrecked the place. Steve had to team up with Denzel, Connie, and Ethel to get them out of there with a bunch of schemes. One of the schemes was to give Angel Dust a birthday present, which actually contained a cube of wolves that attacked him. Another one of the plans was for Connie to throw her stinky underpants into the building and torture the bikers with the smell. Angel Dust thought the smell was so bad, that it was basically like his lungs were melting. When the Brickleberry rangers finally caught them, Officer Briggs came in and told them that he was going to take credit for the arrest, which wasn't fair. He said that he was going to kill them all and then just tell the other cops that the bikers did it. Just then, Angel Dust came out and revealed that he was actually an undercover agent, working for the FBI and declared that Officer Briggs was under arrest. Just then, another Satan's BFF revealed that he was actually working for the DEA, and then Rodney came out to say that he was secretly working for the ATF. It eventually turned out that none of the bikers were actual criminals and Satan's BFFs was a criminal organization comprised entirely of undercover cops. The only real criminal was Officer Briggs, who was a dirty cop, who got immediately shot dead by all of the bikers. Angel Dust told Steve to be careful out there and avoid running into any real criminals and went back to his normal life, as he got out of his disguise, sadly realized how he'd wasted ten years of life life as an undercover cop for a benign organization, and asked id anyone knew of a good methadone clinic. 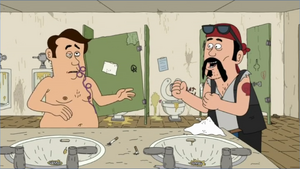 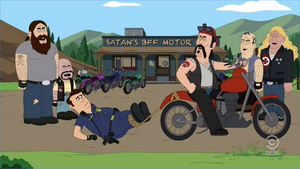 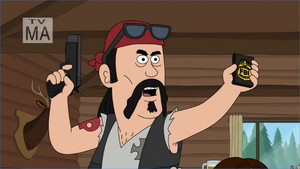